“No One Has Been Ruled Out,” DA Says Of Potential Charges In Alec Baldwin Movie Set Shooting
Read the full story
February 11, 2020 8:51am
3Comments 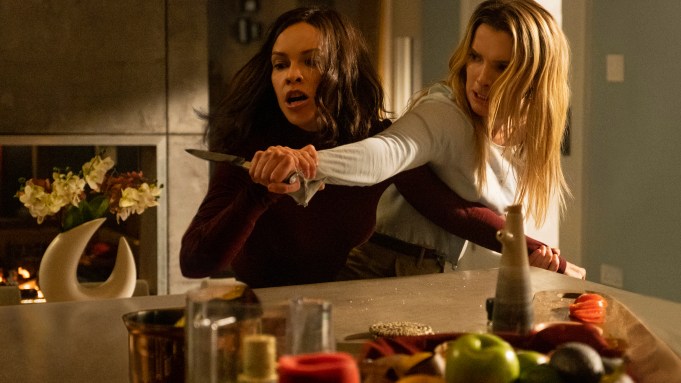 Following a barrage of criticism eight months ago from right-wing commentators and President Donald Trump, who called the movie one that will “inflame and cause chaos,” Universal-Blumhouse’s The Hunt is muscling its way back on to the release calendar with a March 13 date. It’s being billed in a new ad campaign as “The Most Talked About Movie of the Year Is One That No One’s Actually Seen.”

The action thriller, directed by Craig Zobel and written by Damon Lindelof and Nick Cuse, follows wealthy liberals, led by Hilary Swank, who kidnap lower-class flyover state folks and drop them in a field, only to hunt them down. Betty Gilpin plays one of those captured who has the wits and skills to do battle.

The Hunt originally was set to open on Sept. 27. But after a TV spot aired during the Aug. 4 final season premiere of AMC’s The Preacher, a backlash ensued from the right, with ESPN yanking a spot for the pic. Following last summer’s mass shootings in El Paso, Texas, Dayton, Ohio, and Gilroy, California, it just wasn’t the right time to promote a gun-toting action film, and so Universal not only slowed marketing, but pulled The Hunt from the calendar altogether on Aug. 10.

“We couldn’t foresee the events coming into the fall which made it not a good time for this movie,” The Hunt producer Jason Blum tells Deadline about the pulling and re-dating of The Hunt, “I think enough time has past, and both Damon and I are proud of the movie. We feel comfortable for it to come out now.

“In the early marketing, people took away a different message,” he added. “The movie is a satire and pokes fun at both sides, and the idea this time around in the marketing was to lean into that fact. The truth is no one has seen the movie — the people who judged the movie in any way, judged it without seeing it. I’m hoping that the people see the movie and decide for themselves.”

The one-sheet includes pull quotes from a number of right-wing commentators, who smashed the movie upon seeing its marketing last summer.

….to inflame and cause chaos. They create their own violence, and then try to blame others. They are the true Racists, and are very bad for our Country!

I actually got the chance to see The Hunt, and it’s such a great ride, and very much in the spirit of The Purge in regard to being a genre film laced with a satirical social commentary. The movie doesn’t weigh heavily against red state or blue state factions, rather it comments on the extremity of both sides and their thinking. In fact, the movie’s heroine, the one who you root for, played by Gilpin, she’s a red state denizen, but she never wears her politics on her sleeve as heavily as blue state-er Swank, who plays a crazed, wealthy exec who is the architect of this bloody game.

By the way, this shoot-off doesn’t take place in America, rather foreign soil, the country being Bosnia. In essence, Gilpin plays a modern day female Rambo, an evolution from Alien‘s Ripley and Terminator‘s Sarah Connor before her.

Talking about the origins of the movie, and how he had no ax to grind against the right per se, Lindelof told us, “Nick and I worked on The Leftovers and then on Watchmen, and in the space between those shows, we saw Get Out. We were blown away from that; there’s a way to do an elevated genre movie. We revisited The Purge movie and saw that there was a lot more to them, they were really enjoyable crowdpleasers, a way to take a simple idea, and put it in the Blumhouse model. [In regards to The Hunt] We were interested in the idea of conspiracy theories running amok, pulling on all sides, an apolitical idea: What would happen if a ridiculous conspiracy wound up being true?”

The Hunt will go up against such wide entries as Sony’s Vin Diesel action pic Bloodshot and Lionsgate’s Faith-based music movie I Still Believe. Actually, Blumhouse had the release date RSVP’ed all along on the calendar with an untitled movie. The news now is that movie is The Hunt.

It’s not the first time that Hollywood has scaled back on a theatrical release following national tragic events, out of respect. Post Sept. 11, Warner Bros. pushed back its Arnold Schwarzenegger release Collateral Damage and disposed of a trailer that featured a stateside bomb attack. MGM’s Death Wish 2017 remake was delayed many months out of respect for the mass shooting in Las Vegas.

Back in August 2015, Universal’s sister cable network USA posted the season 1 finale of Mr. Robot by a week given a scene which was far too similar to real-life murders that occurred on live TV at the time. A reporter on the day of the season finale, and cameraman for WDBJ-TV in Roanoke, Va., were shot and killed while delivering a live report for the station’s morning news program by a suspected former co-worker.

Should The Hunt prove successful at the box office, Lindelof says that he and Cuse “have a couple of ideas” for a sequel.