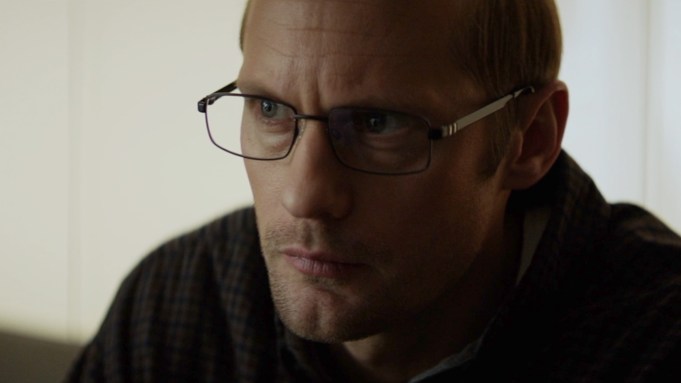 In 2010, Jesse Eisenberg got an Oscar nomination as Mark Zuckerberg, the genius behind Facebook. Now he is back in the innovation business, this time as a fast-talking young (fictional) entrepreneur with dreams of creating a fiber-optic line from Kansas to New Jersey and upending the tech world. Like Facebook the idea could be game-changing as it promises to take a couple of milliseconds for data to travel from the time a deal is made on Wall Street. That millisecond can mean the difference between millions or nothing, or so the storyline of Eisenberg’s new film The Hummingbird Project would have us believe. A movie set in this high-tech world is a bit beyond my pay grade, but in the hands of a cast that also includes Alexander Skarsgard, Salma Hayek and Michael Mando, it is compelling to watch and pretty damn entertaining.

Plotwise, cousins Vincent (Eisenberg) and Anton (Skarsgard) are sons of Russian immigrants, and they are players in the digital world of High Frequency Trading on Wall Street, a world where winning is the only thing that matters and in many cases is measured in milliseconds. They work for a big company run by ruthless Eva Torres (Hayek), but have hatched plans to break away on their own with the help of a financier, as well as engineer named Mark Vega (Better Call Saul’s Mando) who can facilitate and operate the heavy equipment needed to bring to fruition their idea of a fiber-optic wire across the U.S. heartland.

Vincent is the salesman of the plan, the hustler who wills it into being, while Anton is more on the spectrum but critical as the code guru behind it. The film, written and directed by Kim Nguyen (of the Oscar nominated foreign-language film War Witch), follows their improbable dream as this becomes one Wall Street movie that plays more like an outdoors epic with vast vistas of America as construction continues in the middle of the country. Through it all, Torres schemes to destroy their plan and beat them to the punch with her own idea.

Nguyen, perhaps recognizing that any plotline like this can’t afford to get too wonky, keeps the emphasis on the human connection and emotional toll along the way, particularly as a health crisis for Vincent raises the stakes in ways they never imagined. At its heart, The Hummingbird Project addresses the increasingly fast, take-no-prisoners pace of life in America right now, and warns us to slow down and smell the roses before it is too late. Although Nguyen’s script is fictional, it is inspired by real life and the kind of new-age technology that only promises to increase the speed with which we live our lives.

Eisenberg, with tons of dialogue as usual, delivers on all cylinders in a role you probably could only imagine him taking. Skarsgard is virtually unrecognizable with bald cap and a heavy stomach, but he underplays it all nicely. Hayek, with distracting streaked hair, is a bit cartoonish to be fully believable but she gives it her all. Mando plays the voice of the reason between the cousins and keeps it all grounded in a fine supporting turn. The scenery is actually Canada where Nguyen shot in his native country, but has matched America to the point you can’t tell the difference. He keeps it all moving well without getting bogged down in techno speech, a very good thing indeed.

The film is set just a few years ago because Nguyen knows if he set in real time and not as a period piece it likely would have be out of date by the time the movie reached theaters. Fortunately, the human element keeps it relevant and a fascinating movie I can wholeheartedly recommend to smart audiences. It had its world premiere at the Toronto Film Festival and goes into limited release through The Orchard beginning Friday. Check out my video review above with scenes from the film.

Do you plan to see The Hummingbird Project? Let us know what you think.