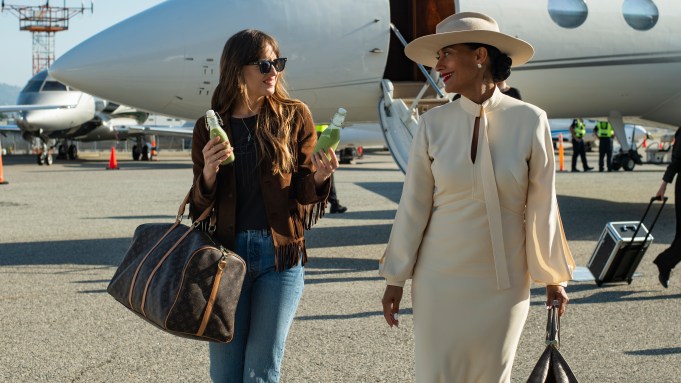 In Focus Features’ The High Note, Tracee Ellis Ross plays a middle-aged musical superstar who would rather record a new album than take her manager’s advice and headline Vegas. She finds an unlikely ally in her new (and overworked) personal assistant (Dakota Johnson).

Black-ish‘s Ellis Ross – who knows a thing or two about singing legends, being the daughter of the great Diana Ross – and Johnson star alongside Kelvin Harrison Jr., Ice Cube, Zoe Chao, Eddie Izzard, Bill Pullman and Diplo. Written by Flora Greeson, The High Note is directed by Nisha Ganatra. Producers are Tim Bevan and Eric Fellner.

The synopsis: Set in the dazzling world of the LA music scene comes the story of Grace Davis (Ellis Ross), a superstar whose talent, and ego, have reached unbelievable heights. Maggie (Johnson) is Grace’s overworked personal assistant who’s stuck running errands, but still aspires to her childhood dream of becoming a music producer. When Grace’s manager (Ice Cube) presents her with a choice that could alter the course of her career, Maggie and Grace come up with a plan that could change their lives forever.

Focus Features releases The High Note in theaters on Friday, May 8.