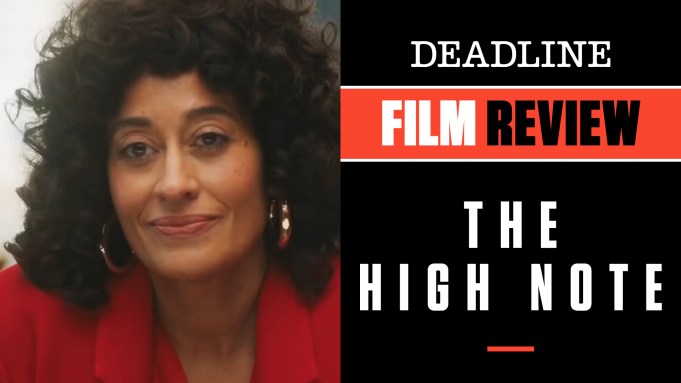 Director Nisha Ganatra scored points with me for delivering a smart, female-driven comedy last year in Late Night with Emma Thompson and Mindy Kaling. It was set in the showbiz sector of late-night television talk shows but focused on two women, very different yet striving for similar professional goals in a male-dominated environment. With the help of an entertaining and inspiring storyline from screenwriter Flora Greeson, Ganatra has moved on to the music business in The High Note, but the same vibe is there as it zeroes in on two women — one a superstar in her 40s facing new creative challenges, the other her personal assistant with ambitions to be a record producer in a business that to say the least is a tough mountain to climb. Both face resistance in interesting ways, but ultimately the message is clear: Follow your path, your dreams,  and don’t let anyone tell you otherwise.

The presence of Tracee Ellis Ross as Grace Davis, a multiple Grammy-winning musical icon now on the other side of 40 and fighting against career advice telling her to lean on her past instead of charting a new,  more satisfying course, is of course fascinating casting. The daughter of Motown legend Diana Ross has been much better known for her comedic talents, particularly in her long-running series Black-ish, but now is venturing into her mother’s territory in this role by singing and recording publicly for the first time.

Not to worry, though, this is clearly not her mother, or a roman à clef in any way, and Ross, this Ross, ably proves she has inherited the musical talent but in her own style — or at least that of Grace Davis, the fictional star she plays here. Her manager Jack (a very funny Ice Cube) is pushing meetings with her male-infused label, which wants her to put out a remix greatest hits album and also take on a residency in Las Vegas so she can basically deliver the tried-and-true hits of her past.  She is not enthusiastic about the idea, and that can make life a little rough for her assistant Maggie (Dakota Johnson), who sometimes takes the brunt of her displeasure.

Maggie, having gotten the bug during this job, is itching to become a producer and even covertly has been encouraging her own hot prospect, a young soul singer named David Cliff (Kelvin Harrison Jr.) whom she wants to take into the studio and has to find a way to do it at the same time as her day job. The dueling plotlines driving the goals of these two women, their own complex relationship, and the overriding theme of following your own dreams makes The High Note a perfectly pitched tonic for these dark times. It is sweet, uplifting and engaging throughout. It may not be a gritty document of the inner workings of the cutthroat music biz, but right now I am gonna opt for the feel-good high road The High Note chooses to follow.

In addition to Ross, who crushes it in a motion picture leading role, there is also some sweet work from Johnson, who provides the ideal screen partner. Along with Ice Cube, June Diane Raphael gets some nice laugh lines in the typical gal-pal role as a close confidante of Grace’s. Harrison not only nails his role, but he also displays a strong singing voice. Eddie Izzard is in briefly, and the always dependable Bill Pullman is just right as Maggie’s dad with whom she reconnects when visiting her old home on Catalina Island after her career plans take a nosedive. Special shout-out to music maven Rodney Jerkins who supervised the soundtrack, and songwriters Corrine Bailey Rae and Sarah Aarons whose original pop songs are so convincing you’d swear they were long-ago hits.

Check out my video review above with scenes from the film. Do you plan to see The High Note?  Let us know what you think.