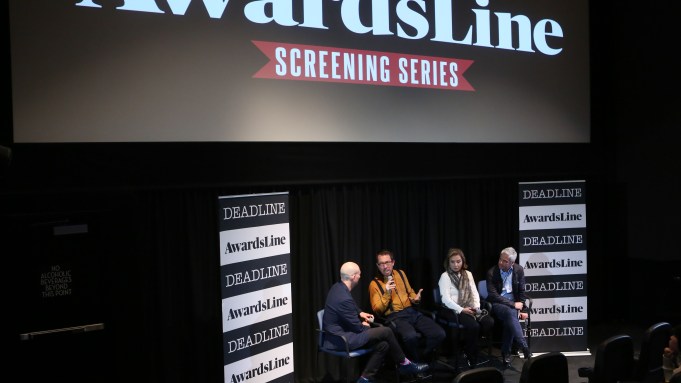 “I come from a country where men have a very strong presence in public life and women do not,” says The Heiresses director Marcelo Martinessi of Paraguay and the burgeoning cinema scene there. “In my country, drug trafficking is not punished, love is punished.”

“Women in my country are very important and they are not visible,” the filmmaker added of why he made the movie that is now the South American country’s entry for the Best Foreign Language Film at the 91st Academy Awards.

As you can see from the video above, the first time feature director was in Los Angeles last night for an Awardsline screening of The Heiresses.

Joined by star and first time film actor Ana Brun and producer Sebastián Peña Escobar, Martinessi stressed that as much as Paraguay is changing, there was still a backlash in some conservative circles to the same-sex relationships that The Heiresses depicts. “When you make any work of art, when you put it out there, what the reactions are tell you a lot about the society you come,” long time documentary maker Martinessi declared to the crowd who had come to see the film.

A Silver Bear win for Best Actress for Brun at the Berlin International Film Festival earlier this year, The Heiresses tells the tale of old money drained away, entitlement and new beginnings. With her long-time partner in jail over debts, the equally broke Brun’s Chela ventures out of her gilded home in the nation’s capital of Asunción into a world where the rules are very different than what they once were, even for the once rich.

A lawyer in her day job, Brun told the crowd through translation from Escobar how she worried so much about the blowback to the film in Paraguay that she changed her name partially to avoid any problems. With a few exceptions, Martinessi joked that the opposite occurred and Brun has actually gained clients in her law practice from the role. A role that Brun says she doubts will be her last on the big screen.

Including high-profile films like The Heiresses, plus Mexico’s Roma and Poland’s Cold War, there are 97 films vying to make the Academy Awards’ foreign language film nominations list when the announcements are made on January 22 next year.

In the meantime, take a look at my conversation with The Heiresses team, it’s enriching for all who believe in the power of film.