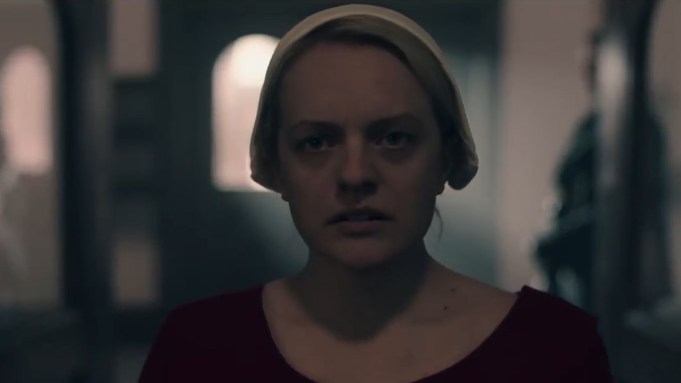 The Bible says that “in the beginning there was the Word.” Tonight, with the just launched Season 2 ender of The Handmaid’s Tale, “The Word,” as the episode is called, was put to the test and embarked on a new beginning for a Hulu series that has again proven a must watch – even when you wanted so often to turn away.

The fact is, having stalked this season beyond the boundaries of Margaret Atwood’s 1985 novel on which the Elisabeth Moss led Emmy winner is based, the latest cycle of The Handmaid’s Tale has been soul shockingly harsh, as I say in my video review above. Yes the voice of Oprah showed up for a second but execution, exiles, rapes, hangings, drownings, repression, and maiming of the body politic and the body itself have been strewn all over the Bruce Miller showrunner 13-episode run. Accordingly, through the reach of television and streaming, the Tale has become a touchstone and warning sign for a real-life America that grabbles amidst its widening divide with ever more occurrences of the emergence of the Republic of Gilead.

In a real-life America where the self-proclaimed pious theonomic Republic of Gilead has becoming an increasing phrase of warning this year, the Season 2 finale that just went up on Hulu sees another outstanding and award deserving performance from Moss as the fertile but also blooming Offred AKA June. With strong turns all season from Ann Dowd, Amanda Brugel, Alexis Bledel, Max Minghella and Samira Wiley, Season 2 of The Handmaid’s Tale truly spotlighted the talents of Yvonne Strahovski as the complicated, callous and compromised Serena Joy.

If the final scene of “The Word” finds Moss’ June choosing to stay and truly resist and save what’s hers, the privilege and presumed powerful once conservative activist Joy is cut down, literally and figuratively but also hardened into something worse and unexpected. Working with the often lean but mean narratives from Miller and team, the actor uniquely made hearts break in that last episode of the season as a mother in a world where motherhood is a rare prerogative and the realization of the rights she helped take from women are now denied to her own child. So tight on screen and in the claustrophobic world of what was once the United States with the daughter giving Moss for so much of Season 2, Strahovski pulled back the presumptions in tonight’s finale for a person who has been almost nothing but an object of contempt and source of vileness for most of The Handmaid’s Tale’s run so far.

Terrifying Gilead is a state where no one is safe or to be trusted in a society gone mad on its own frothing dogma. Yet, the Season 13 finale optimistically unveiled, the fight is not over even if this latest excellent cycle of the renewed show is.

Go and watch the end of Season 2 of The Handmaid’s Tale but first check out my video review above of the closer and the entire second season first – because the word is love.