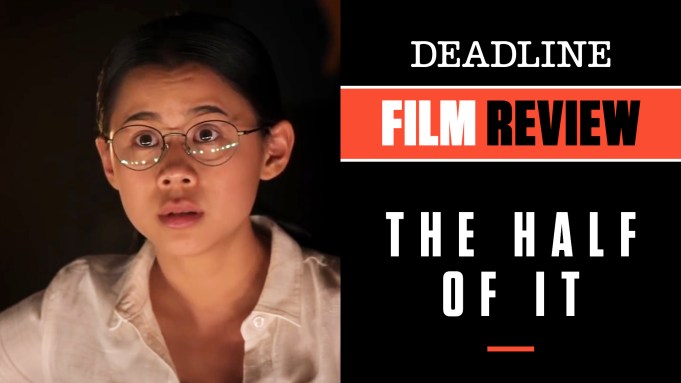 The premise isn’t terribly original — yet another comic takeoff on the Cyrano de Bergerac formula mined by so many others including Steve Martin’s brilliant Roxanne. But Alice Wu’s heartfelt and personal teen romance The Half of It doesn’t feel stale at all thanks to few twists and an exceptionally bright young cast led by the beguiling Leah Lewis.

She plays the young Chinese immigrant who writes love letters for a not-so-bright bulb on the football team because apparently he can’t put together a coherent thought about his crush on the beautiful new girl in town. She is being pursued not only by him but also a stuck-up guy with no modesty whatsoever. It gets very complicated from there, though, unexpectedly playing with gender and emerging sexual identity. And that’s half the fun of The Half of It, which taken as a whole is a pretty nice little Netflix flick that would make John Hughes and other past masters of this genre smile down with approval.

So here is how it goes. Ellie Chu (Lewis) is a smarter-than-average student, a band nerd who seems invisible to the boys in her school. Except for Paul Munsky (Daniel Diemer), a lunky and somewhat clueless but good-hearted football player who has a serious thing for hot new girl Aster (Alexxis Lemire) but doesn’t know the first thing about appealing to her because she actually has a love of books and other intellectual pursuits that are completely foreign to him. She’s also gotten the eye of the comically conceited Trig (Wolfgang Novogratz), whose main crush is on himself. What to do to get her attention?

Paul hires Ellie, known for writing classmates’ English papers for a price, to write love letters (or texts in this new age) to win over Aster. As she does agree to do just one, it becomes a much more complex assignment than she ever dreamed as the notes become very personal and it is clear that we don’t even know the half of it when it comes to the romantic longings of Ellie. She came from China at a very young age with her dad (Collin Chou) and now-deceased mother, working in the booth guiding the two daily trains that come through the small town where they live. She seems to spend most nights sitting next to her still-grieving father as he learns English by watching old classic movies like Casablanca and Charlie Chaplin’s City Lights. With the family strapped for money, she agrees to ghost write for Paul, but where this goes is a surprise she — and we — never expected. If you think this quadrangle is going to end up where most romantic comedies go, think again. This is a thoroughly contemporary and humane take on matters of the heart, splendidly spelled out by its promising filmmaker.

‘The Half Of It’ Trailer: Alice Wu’s Coming-Of-Age Netflix Dramedy Delivers A Different Kind Of Love Story

Suffice to say it isn’t at all predictable, and that’s much of the fun. Each of these kids is a delightfully etched individual in a movie that promises right from the start not to expect what maybe you were expecting when you tuned in. Chu is just a splendid, often deadpan force at the film’s center, matched by the lovable innocent lughead of Diemer. Lemire comes out of this as clearly an actress headed for a huge career, a real presence on screen to be watched. The only drawback for me is a big confrontation scene in a church where Wu’s balancing act of keeping this all together almost collapses. But, like a true pro, she never lets it get away from her or drift into slapstick, and — with the help of these immensely likable characters — brings it all home in bewitching style.

Anthony Bregman, Blair Breard, and Wu produced. It begins streaming Friday on Netflix. Check out my video review with scenes from the film at the link above.

Do you plan to see The Half of It? Let us know what you think.