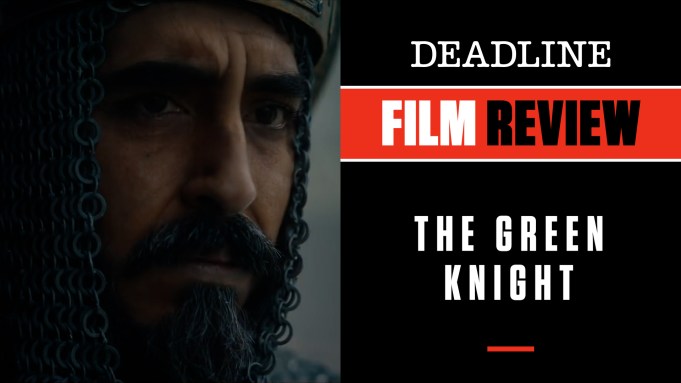 The Oscar-winning Lord of the Rings trilogy and the Emmy-winning Game of Thrones have set the table for a summer sleeper in writer-director David Lowery’s extravagantly entertaining and surprisingly pertinent The Green Knight, which rides into theatres Friday and is something exhibitors and audiences should greet with open arms. I am not sure why its release was abruptly delayed in England, but I assure you it has nothing to do with the quality of this rich tale set in the 14th century and a Camelot we haven’t quite seen before.

Spinning off from the poem, “Sir Gawain and the Green Knight,” Lowery has shortened the title and turned it into a cinematic journey to remember. This all fits nicely into Lowery’s eclectic filmography, which started with Ain’t Them Bodies Saints and has proven wildly unpredictable as he veers from esoteric art films like the ethereal A Ghost Story to Disney remakes like Pete’s Dragon with Robert Redford. But as he says, this unique poem — one of Christianity, Paganism and numerous other things subject to all sorts of interpretation — has been rolling around in his head for the better part of 20 years. He finally knew it had the stuff of movies and just had to find the right way in. He has largely succeeded by casting Dev Patel as the somewhat cocky nephew of King Arthur, who was given entry into the Knights of the Round Table due to connections more than anything else.

As Sir Gawain, he alone answers the challenge posed by a mysterious stranger (aka The Green Knight) who rides into the court of the King on Christmas Day and presents an offer to anyone who will accept it. The deal is this imposing emerald-skinned figure will offer himself up for a duel in which he may be beheaded, but only if the knight participating agrees to meet him on the next Christmas a year away, where he will be given the same treatment in return. Only Gawain takes him up on it, does chop off his head and becomes quite the talk of Camelot. Will he follow through and meet his end of the bargain? Can he prove himself to all those in the Round Table? Gawain’s journey begins as the calendar turns to the agreed-upon time, and it takes him into a delicious fantasy world involving highway thieves, grifters, ghosts, giants on the march, a talking fox companion and a blindfolded dowager with perhaps all the answers. What Gawain embarks on is a physical journey but also a metaphysical one as well, a journey to finding his own self-worth and sense of courage on the way to meet his fate with the Green Knight.

Along the way there are many consequential encounters notably including a visit to the Castle of Lord Bertilak (Joel Edgerton) and his wife (Alicia Vikander in a double role that also includes Essel, playing the paramour of Gawain). Finding temptation of the flesh with Bertilak’s wife is only one of the conundrums he faces on the long ride, and without giving anything away the destination is just as compelling as the journey itself. Lowery and an ace production team keep it dark and teeming with intrigue, a gorgeously filmed (in and around Dublin) sojourn back to the time of the Knights of the Round Table but in a story, though filmed twice before, that has never been told on this scale. Patel is perfectly cast, embodying the all the self-confidence and self-doubts Sir Gawain experiences as he prepares to face his fate head on, as it were. Edgerton is simply excellent here, having played Gawain himself in the 2004 film King Arthur. Vikander shows great range in taking on two key roles, and Ralph Ineson is superb as the title character. Shout-out also to Sean Harris as the King and Kate Dickie as the Queen, Barry Keoghan as the scavenger Gawain meets along the way, and especially Sarita Choudhory as Gawain’s mother.

Fans of epic tales like Lord of the Rings will find themselves transfixed with this intelligent and thought-provoking trip back to that time. It is no accident that LOTR author J.R.R. Tolkien was the man who first translated the poem, all written in verse, into the English language in 1925. This movie will prove we are still talking about it in 2021 and still deciphering what truths it holds.

Producers are Toby Halbrooks, Tim Headington, James M. Johnson, Theresa Steel Page, and Lowery. A24 opens it in theaters Friday. Check out my video review with scenes from the movie at the link above.

Do you plan to see The Green Knight? Let us know what you think.