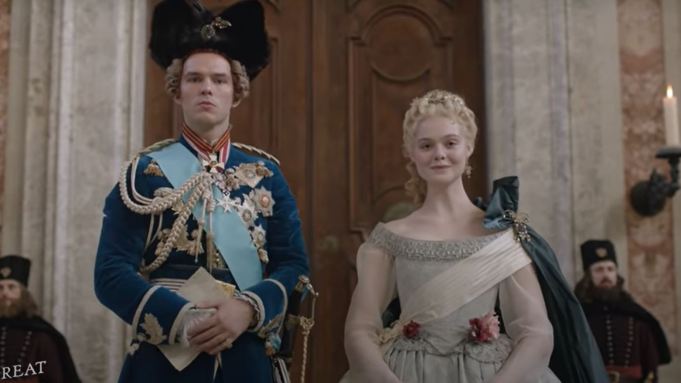 The czar’s arranged bride tells him how they can move Russia forward “together.” He stands, frowns and reminds her, “No, I rule — you serve!” In the next scene in the first full trailer for Hulu’s cheeky dramedy The Great, he is told, “Your queen is unhappy.”

But should she die for that?

Said queen is Catherine the Great (Elle Fanning), and Nicholas Hoult is Russia’s Emperor Peter. Watch the trailer — which focuses on the comedy — above, and check out the key art below.

Billed as an anti-historical ride through 18th century Russia, the series traces the rise of Catherine the Great (Fanning) from outsider to the longest-reigning female ruler in Russia’s history. Here is Hulu’s logline: Season 1 is a fictionalized, fun and anachronistic story of an idealistic, romantic young girl who arrives in Russia for an arranged marriage to the mercurial Emperor Peter (Hoult). Hoping for love and sunshine, she finds instead a dangerous, depraved, backward world that she resolves to change. All she has to do is kill her husband, beat the church, baffle the military and get the court onside. A very modern story about the past that encompasses the many roles she played over her lifetime as lover, teacher, ruler, friend and fighter.