Continue to Deadline SKIP AD
You will be redirected back to your article in seconds
Skip to main content
August 21, 2020 3:10pm 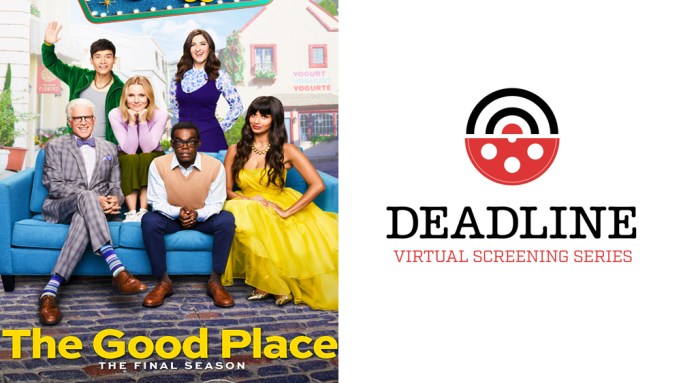 The series finale of The Good Place aired on NBC on January 30, 2020 and we saw Eleanor, Michael, Chidi, Tahani, Jason and Janet say their emotional goodbyes as they walked through “the Door”. The comedy earned six Emmy nominations including Outstanding Comedy Series and although it ended months ago, the emotions are still high from a cast that feels like a genuine family — and it showed during Deadline’s Virtual Screening Q&A.

After a screening of the final episode titled “Whenever You’re Ready”, show creator Michael Schur and series stars Kristen Bell, Ted Danson, William Jackson Harper, Jameela Jamil, Manny Jacinto and D’Arcy Carden talked about how it has been living in the comedically philosophical world of The Good Place.

For Schur, he didn’t necessarily have a paved path in where he wanted the show to go. There was ground he wanted to cover, but it was also organic in the way the show developed with its narrative.

“By the end of the second season, I had a pretty good sense as to what I want to happen if we were lucky enough to call our own shots,” he said. “Most of the third season was spent kind of coming up with ideas and filing them away for the ending.”

In the first season, Bell’s Eleanor serves as the audience surrogate as we are introduced to “The Good Place”. Bell said that when she first met Schur, they were both obsessively preoccupied with what it means to be a good person — and that is how he wrote the show. It was about self-discovery, friendship and the “connective tissue between human beings.” Bell admitted that she would always address the question, “How do we get along? How do we share Earth?”

“I sort of just felt like I handed him all that trust cause I know he knows what he’s doing,” said Bell in regards to her query. “I was thrilled that he started Eleanor in as low of a place he did because when you start someone lower, a lot of people can relate to her.”

She added, “When you look at a girl who can look in the face of someone else and ask her to eat her farts, you’re like, ‘I get that girl’ …I also feel like I am a little better than her but I at least don’t think she’s better than me.”

As Harper talked about how Chidi brilliantly balances comedy and philosophy and Jacinto addressed how Jason subverts the portrayal of the typical Asian male, the one thing that was very apparent was very emotional during the last episode.

When asked who cried the most during the finale, the cast immediately pointed to Carden who agreed with Danson’s sentiment saying, “The lines that our characters were saying, it made the real people’s emotion come up. Janet shouldn’t cry, but D’arcy does cry.”

In the ending for Jamil’s Tahani, she makes amends with her family and, at one point, receives a peacock bow tie from Michael which she said, was one the top three moments of her entire life.

“To be able to see that she has been able to work through all her ‘shirt’ and find admiration and love from her family meant so much,” said Jamil of her ending.

Watch a segment of the Q&A in the video above.