Continue to Deadline SKIP AD
You will be redirected back to your article in seconds
Skip to main content
January 5, 2022 1:26pm 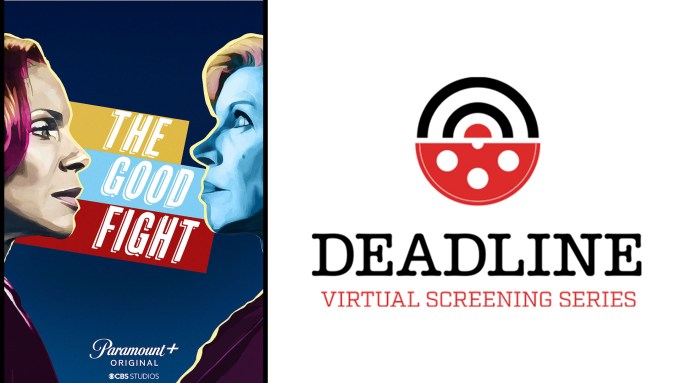 The Good Fight has been taking the news of the day and turning it into quality, dramatic television since 2017.

Season five, which debuted in June 2021 after a Covid-shortened fourth season, was set to be the first that transpired after the end of the Donald Trump Presidency. However, as a result of the January 6 insurrection, the team behind the Paramount+ series were presented with a new challenge.

The Good Wife spinoff, which was created by Robert and Michelle King and Phil Alden Robinson, went headfirst into the themes around the storming of the Capitol as well as the racial tension in the U.S. that spiraled in 2020.

The fifth season saw Christine Baranski’s Diane forced to question whether it was appropriate for her to help run an African American law firm with Audra McDonald’s Liz when the firm loses two top lawyers – Delroy Lindo’s Adrian Boseman and Cush Jumbo’s Lucca Quinn. Meanwhile, Sarah Steele’s Marissa and the law firm become entangled with Mandy Patinkin’s Hal Wackner, a regular Chicago man who decides to open his own courtroom in the back of a copy shop.

During a Deadline Virtual Screening Series, the Kings talked about how they approached the season, the bittersweet farewell of Lindo and Jumbo and how long they see the series, which is gearing up for its sixth season, running for.

The opening episode of the season – Previously On… – is essentially structured as a series of extended recaps with the characters dealing with the impact of Covid-19, the Black Lives Matter movement and the death of Ruth Bader Ginsburg.

“At the top of the season, we were talking to the writers about [whether] you discuss all the things that happened in the world that our characters had lived through but we hadn’t seen with Covid. The decision was that we really wanted to see what their lives looked like as much as our lives looked like. We decided that rather than spend an entire season on that, let’s squish it all in to one episode,” said Michelle King.

Robert King added that The Good Fight is also a TV show that likes to acknowledge that it is a TV show and play with these tropes. “Some of the ugliest things about TV these days are the ‘previously ons,’ so we thought we’d do one that you think is very long and then you’d have a whole episode that is ‘previously ons’ and have the title sequence at the end,” he said. “It felt like a jokey way to acknowledge what TV is these days.”

The pair discussed the exits of two of its main characters. “The one that was very emotional was Cush because we had to send a crew to London, where she was. Delroy has been this rock for the show, seeing him on Da 5 Bloods, how can you hold him back from doing a feature career. We love both and it was hard to see either of them go and then to see them go in the same whack was difficult,” said Robert King.

Michelle King added, “The expectation was that we’d be able to send them off in a gradual way, had we had the last episodes of season four as they were planned but because they couldn’t come to be, both characters had to be said farewell to in one episode.”

Robert King said that the events of January 6 became the “defining course for the year”. “We didn’t know how it was going to be addressed but you’re always looking for driving, thematic engine for the season and for us it was January 6 and that brought us to the idea of everyone creating their own law, the court. We thought comically to address it, then comedy always turns into tragedy.”

The kangaroo court arc was joined by the disagreements between Baranski’s Diane Lockhart and McDonald’s Liz Reddick. “It doesn’t matter how great an idea you have or how great the scripts are, if you don’t have a cast like we do, an Audra McDonald or a Christine Baranski, it doesn’t matter, it would fall flat. The only reason it all works is that we have extraordinary actors on the show,” said Michelle King.

The pair, who also exec produce Paramount+’s Evil as well as series including Showtime’s Your Honor, revealed that they are scheduled to start back with the writers’ room at the top of the new year.

Robert King admitted that he thinks that The Good Fight can run for longer than its original show due to the fact that they don’t have to write and produce 22 episodes a season.

“The Good Wife was a killer 22 episode season so we were always planning towards our escape hatch, what is the way out of that nightmare. The Good Fight is a little different because it’s reacting to the news, it’s a serialized year about what’s going on in the country and the country isn’t getting less interesting, it’s getting more interesting to its detriment so I think we’re not putting a finger on when we would end because there’s a therapeutic quality to the show,” he said.

Michelle King added, “I keep waiting for a moment when the real world isn’t presenting us with so many opportunities for stories and unfortunately it hasn’t arrived.”

The duo closed a big, new overall deal with CBS Studios in July, also make The Bite for Spectrum and are exec producing The CW’s non-scripted adaptation of British format Would I Lie To You? as well as developing projects such as Uzo Aduba’s Low Country.

Robert King admitted that their plate was “pretty full” but he added that he also admired what people like Peter Jackson were able to do with Get Back – take two years to produce a passion project. “I don’t think the people at Paramount+ and CBS think it’s full, they want as much as they can get. I do think we’re looking for a little more balance. Look at what Peter Jackson did with Get Back, that is someone putting exactly what he loves into what he does to make it perfect. Often the perfect we’re going for requires more time. That kind of passion that is given time to grow is very attractive.”

Watch the video above to see more of the conversation with The Kings.