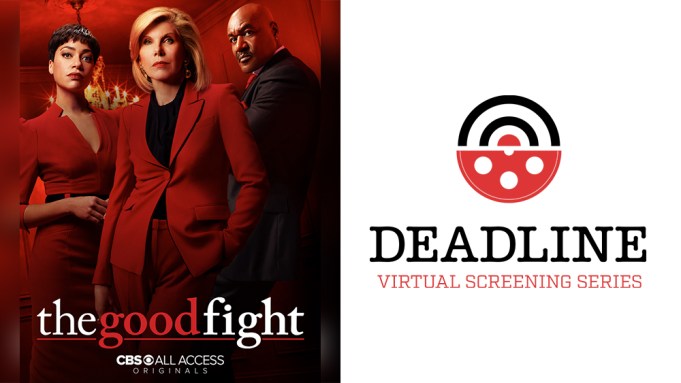 “It’s my favorite episode in the 11 years that I have been playing this character,” says The Good Fight’s Christine Baranski of the Season 4 opener “The Gang Deals with Alternate Reality” and its Hillary Clinton Presidency.

“It’s audacious, it’s funny, it’s deeply thoughtful, its provoking,” the Emmy and Tony Award winner added – as you can see in the video above.

Along with The Good Fight creators and executive producers, star and producer Baranski joined us recently for a virtual screening series of the imaginative Season 4 premiere – again, as you can see in the video above.

“And then how lovely to at least to play half of the show being happy about Elizabeth Warren, and polar bears and cancer,” Baranski noted of her Diane Lockhart character waking up to a very different America, sort of. “It was so refreshing not to be angry, because I’m always … you know I’m a fighter, I’m Diane Lockhart fighting the good fight and she’s pretty much pissed off all the time.”

Certainly, there was some joy for Hillary supporting lawyer Lockhart in the Robert and Michelle King penned episode that aired on CBS All Access on April 9 last year.

However, even as Diane suddenly woke up to an America where Hilary beat Donald Trump in 2016, there was also some anger. Anger and rage that exploded out of long time Clinton backer and now Lockhart law firm client Harvey Weinstein having not only escaped any of the justice handed out in the real world, but actually rose in stature with the Presidential Medal of Freedom as the producer continued his reign of rape and sexual harassment.

“Diane thinks she in Heaven, even thoughts in her mind she remembers all the ways that Trump was, and then realizes there were all these things that didn’t happen like #MeToo, not the way that it could have,” Robert King noted.

Coming back for a fifth season later this year on the ViacomCBS-owned streamer (which is changing its name to Paramount+ in the spring), the 2017 debuting The Good Fight experienced a lot of change, and we’re not just talking about cast members Cush Jumbo and Delroy Lindo exiting.

Losing their biggest client, the now Reddick, Boseman & Lockhart was swallowed up by huge multi-national law firm, STR Laurie. With all of their moves and decisions micromanaged by the new owners, Diane and her colleagues were increasingly reigned in as the emergence of an omnipotent and mysterious “Memo 618” took centerstage.

“I would say one of the reasons that there has been a change in Diane is that the world has changed so radically,” said Michelle King of the shift. “I mean, if you had a different four years in our history, the world would not seem to be as wacky from one place to the next,” the EP asserted