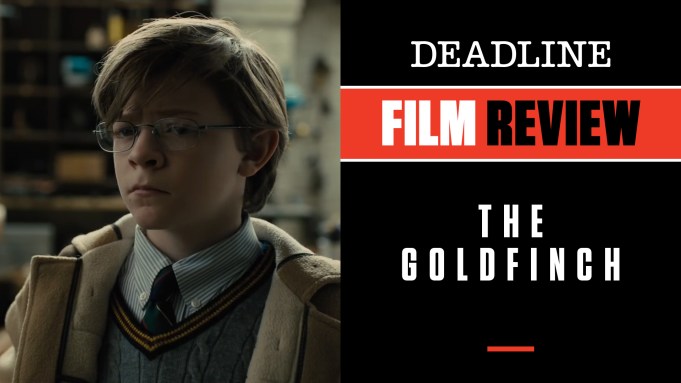 I confess that I have not read Donna Tartt’s best-selling Pulitzer-winning 2014 novel, nor did I know the slightest thing about its plot before seeing The Goldfinch, which had its world premiere Sunday night at the Toronto Film Festival and opens wide Friday through Warner Bros. I did know that to stay atop the bestseller list for more than six months means there has to be something compelling going on, and for me coming in cold there absolutely was.

No matter how difficult it is to adapt a challenging novel of nearly 800 pages into a two-hour movie (actually 2½), we are in very good hands with director John Crowley, who did the brilliant Brooklyn; screenwriter Peter Straughan, whose filmography includes Tinker Tailor Soldier Spy and a lot of offbeat indie films; and ace cinematographer Roger Deakins. They have succeeded in making a riveting and beautifully crafted motion picture that is as much a page-turner as the novel apparently was. It is a haunting coming-of-age story like we rarely get to see anymore, and it is quite complicated as it darts all over the place, back and forth in time with two different actors, Ansel Elgort and Oakes Fegley, playing the key role of Theo Decker, a young boy for whom a tragic occurrence altered the course of his life. We first see him briefly in the former of the older Theo (Elgort), then flash back eight years, where Fegley takes over and the pieces of a complex puzzle begin coming together in non-linear fashion. You will have to be patient.

While being delayed at their original destination, young Theo and his mother go to the Metropolitan Museum of Art in NYC on a whim, but timing is everything as a terrorist attack occurs just as mom goes over to see a special part of an exhibit. Many die including her, and Theo comes to in a hazy fog of dust and destruction, where a dying old man hands him a painting of The Goldfinch that survived. Theo clearly has a reason to pick it up and put it in his backpack, later wrapping it in newspaper as a final connection with his mother. As the film progresses he goes to live with upscale friends and connects the very kind Mrs. Barbour (Nicole Kidman), who takes him in and gives him the kind of loving home he needs — as we discover he does not have when suddenly summoned by and forced to live with his deadbeat dad Larry (Luke Wilson), who lives in a desert city in Nevada with Xandra (Sarah Paulson). Larry clearly is hurting for money, having blown it all, but sees Theo’s inheritance as his ticket to grandeur with a new surefire losing scheme to turn his life around. It is there that Theo makes an important friendship with Boris, a Ukraine-born live wire of a friend who figures heavily as well in his later life. Another key person in Theo’s life is Hobie (Jeffrey Wright), an antiques dealer and guardian to Pippa the red-headed little girl Theo obsesses over who was also in the museum that day. Eventually, as the older Theo takes over, it all turns into a bit of an international thriller, where that painting becomes key once again. But for those, like me, I won’t offer any spoilers.

Taking this sprawling a novel, with considerable moving parts and flashbacks, is not easy, but Crowley manages it nicely even if the plotting is a little unwieldy. The acting is very fine with both Elgort and particularly Fegley handling the role of Theo well. Dual roles in the film also are handled by Finn Wolfhard and Aneurin Barnard as young and older Boris and perfectly matched with thick accents that initially felt a little over the top but eventually settle in. Aimee Laurence and Ashleigh Cummings handle the younger and older versions of Pippa. Paulson and Wilson have the less interesting roles but try to flesh them out, but Wright is consistently good throughout the story as Hobie. Kidman is pure warmth as Mrs. Barbour, and it is a nice change-of-pace supporting role for her.

The movie looks about as handsome as it possibly could be in the hands of Deakins. Certainly the many people who have devoured the book will bring their own perceptions to it, as will some critics who just can’t help reviewing the book while seeing a movie that should stand on its own — and does. It is in the classic tradition of bringing best-selling novels to the screen, an art that largely has been lost in recent years as studios seem more interested in adapting comic books instead. Producers are Nina Jacobson and Brad Simpson. Amazon has much of the international distribution. Check out my video review at the link above with scenes from the film.

Do you plan to see The Goldfinch? Let us know what you think.