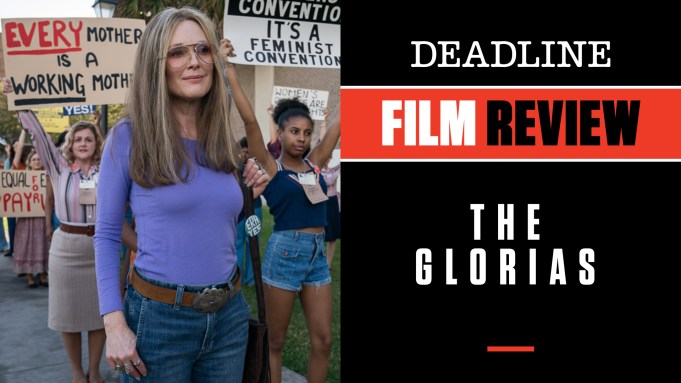 Julie Taymor is a director who always swings for the fences, whether a splendid biopic of Frida Khalo or a vivid reimagining of The Lion King for Broadway. Changing Prospero from male to female in her adaptation of Shakespeare’s The Tempest is another example, if not quite as successful, but now her unconventional and highly watchable biopic of feminist icon Gloria Steinem just adds to the fascinating filmography she has been building.

Covering 80 years in the life of a woman who has meant so much to the fight for women’s rights over the decades, Taymor and her co-screenwriter have crafted a structure in The Glorias that allows for four different stars to play Steinem at key points in her life. The connecting tissue to it all is a Greyhound bus that links the four Glorias in black-and-white footage that only turns to color when they are in their individual sections. Ryan Kiera Armstrong plays her as a child, Lulu Wilson (Annabelle) as a young teen, Alicia Vikander in her 20s and 30s and finally Julianne Moore takes it home from her 40s to now. Actually the “now” Gloria is also the game-changer herself seen in footage toward the end. It is all based on Steinem’s book My Life on the Road, and, though overlong and a bit lumbering at points, this “gimmick” works more credibly than you might think it would.

Much of the credit is due to the four Glorias who somehow keep the spirit of Steinem in sync from beginning to end, with the landmark 1977 National Women’s Conference a distinct highlight along the way and the stirring Women’s March on Washington the day after Trump’s I2017 inaugural matching that with real footage. Taymor can’t quite escape the pitfalls of Hollywood biopics completely, and at times The Glorias bogs down a bit in detail or in rushing through certain eras, but the cast is so spirited and the idea so invigorating to the genre that we stick with it.

Vikander gets perhaps the most interesting section as she plays the years Steinem went to India on a fellowship, examining firsthand the treatment of women in other cultures, and clearly it made an impression. The Oscar-winning star of The Danish Girl is three-dimensional in her portrayal, never giving an impression but rather nailing the essence of Steinem in those years. Moore, of course, is exquisite as you would expect, not missing a beat in playing the older and wiser Steinem in the handoff from Vikander, who also notably gets to play the budding writer, not given much of a chance by male magazine editors until she comes up with her own publication, Ms. Magazine, in 1972. Her article for Show magazine in 1963 is interesting, though, as she goes undercover as a Playboy bunny (that became its own movie). Other actors pop in and out at various points. Timothy Hutton is her freewheeling salesman father, who is the one to encourage her travels and opening up to the world around her. And as Ruth, her mother, Enid Graham serves as a kind of sad role model as she can only get work as a journalist by using the pseudonym of a man. Clearly that made its mark in the depression that followed for her, especially on her young daughter watching from the sidelines.

Things really liven up with the entrance of Bette Midler, ideally cast as Congresswoman Bella Abzug during the political heyday of the ERA movement and a good friend to Steinem. Margo Martindale also played her this year in the excellent limited series Mrs. America (in which Rose Byrne expertly played Steinem), and both stars put their stamp on the colorful figure without making her a caricature. There is also fine work from Lorraine Toussaint as activist lawyer Flo Kennedy and Janelle Monae as Dorothy Pittman Hughes, both women serving as key figures for Steinem, as did Wilma Mankiller (Kimberly Guerrero), who became the first woman ever elected Principal Chief of the Cherokee Nation. Her deathbed scene is the most moving in the film.

There isn’t too much The Glorias leaves out, and we do get a good glimpse of the private Gloria Steinem, but ultimately this film is a rallying cry for all the things its title subject still is fighting for. Her story isn’t finished yet, fortunately, and the causes for which she has held the flag high are again under the microscope with some like Roe v Wade teetering as the Supreme Court takes a swing to the right. Thus The Glorias isn’t just your normal biopic — it reminds us of a person who is still out there fighting the good fight, and a call for action for those in the audience.

Producers are Lynn Hendee, Alex Saks and Taymor. Steinem is an executive producer. The film premiered at Sundance in January, and Roadside Attractions and LD Entertainment release it Wednesday. Check out my video review with scenes from the film at the link above.

Do you plan to see The Glorias? Let us know what you think.