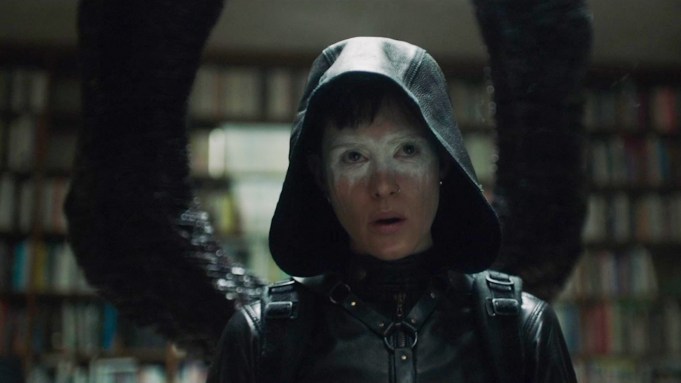 With its “complete” title The Girl in the Spider’s Web: A New Dragon Tattoo Story, we get the idea that the filmmakers are trying hard to emphasize that this edition of the adventures of Lisbeth Salander is indeed new. It also feels quite different from its predecessors spawned from the well-regarded Stieg Larsson trilogy of books: a trilogy of Swedish-language films starring Noomi Rapace, as well as an English-language remake of the first book The Girl With the Dragon Tattoo, directed with a faithful hand by David Fincher and starring Rooney Mara in the title role.

However, Sony’s sequel to that film takes Lisbeth, now played by Claire Foy, in a bit of an unexpected direction, based on a book written by David Lagercrantz who took over the series after the Larsson’s death. Mass movie audiences in America at least may appreciate the change as making the series a bit more in line with current tastes, and less a visit to the darkest sides of this girl. Snow still plays a big part in the atmospherics of it all.

As I say in my video review above, although Foy gives it a good game and there are clear similarities to previous Salanders, this film directed by Fede Alvarez seems more interested in the action possibilities for the character rather than her tortured past and how that affects her present state of mind. This Salander, as played by Foy, is ideal for the #MeToo moment (intended or not), as witnessed in an early scene where she comes to the rescue of an abused wife by pulling the rug out from her philandering husband financially, and in just about every other way. It is a scene designed to make the audience cheer, and the rest of the film follows similar tropes of Hollywood films as Salander is also now extremely adept at all things Internet and really knows how to use a computer better than any IT guy ever could. She also might just make you think of a female Bond or Ethan Hunt in the way she drives slick vehicles over icy lakes, handles chases with the best of them, and seems able to survive just about any impossible situation she is sucked into (literally, in one instance).

The plot, such as it is, also feels reminiscent of any number of Bond movies, with bad guys, including the so-called Spider Master, after the codes for the world’s nuclear stockpiles. One man, Frans Balder (Stephen Merchant), has figured out how to access them, but has second thoughts. Cleverly, he teaches his 6-year-old son how to memorize the codes in case anything happens to him. (SPOILER ALERT: Of course it does, and the kid becomes endangered). Mix in Lakeith Stanfield as an NSA hacker taking an interest in all this as Lisbeth gets involved in the convoluted goings-on that also lead to confrontation with her heretofore little-known sister Camilla (Sylvia Hoeks), who is trouble walking. An opening scene with the younger versions of the sisters playing a game is a set up for all this. Their no-good father enters the room in order to have his way with them before Lisbeth jumps out the window and escapes through the snow, leaving her sibling to fend for herself in events that leave her scarred for life and resentful of Lisbeth all these years later.

And if you are wondering what happened to Mikael Blomkvist, the journalist character played by Daniel Craig in Fincher’s version, he is still around, played by Sverrir Gudnason, but his value to the story is greatly diminished. (The Swedish trilogy’s Blomkvist was played by Michael Nyqvist, who died in 2017.)

As for Foy, this is an actress who seemingly can do just about anything and make it meaningful, though for anyone who saw Rapace do it in the first place won’t forget her performance as a much more complex Lisbeth than the one Foy has been given. The script by Jay Basu, Steven Knight and Alvarez weaves a tangled, if not terribly memorable, web indeed, and Alvarez (Don’t Breathe) follows the studio orders competently on this one as director as well.

Lots of producers baked this cake including Scott Rudin, Amy Pascal, Eli Bush, Elizabeth Cantillon, Berna Levin, Soren Staermose and Ole Sondberg. Sony opens it wide on Friday. Salander purists may balk, but it may well find enough new fans that this may not be the last we see of Lisbeth. She is still worth watching, even in lesser versions of her story.

Do you plan to see The Girl in the Spider’s Web? Let us know what you think.