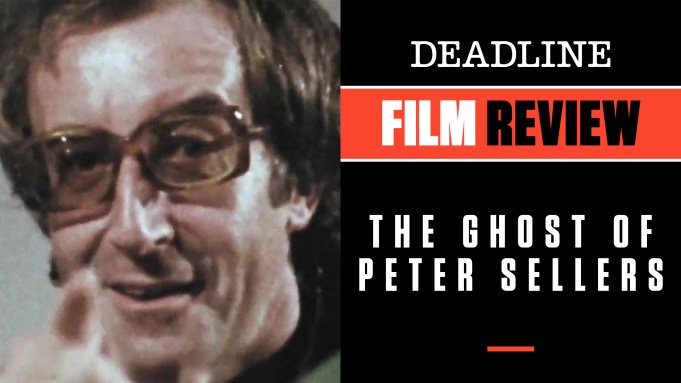 As disaster hits the industry due to the coronavirus shutdown, what better time to release a movie about the making of a true movie disaster that its filmmakers and all concerned probably wish had been shut down – permanently? But that is the case with Ghost in the Noonday Sun, the 1973 pirate comedy starring Peter Sellers. Calling it a nightmare shoot is to understate it, at least as evidenced in a terrific new documentary from the film’s beleaguered director Peter Medak.

It has been 47 years, and he has gone on to have a successful career with numerous other movies and TV projects, but clearly he hasn’t gotten over the complete failure of what should have been a nice, fun Sellers project — one even reuniting the star with Spike Milligan, the comedy partner with whom he launched his career. Nearly half a century later, its director still is asking for penance, and perhaps using his behind-the-scenes docu The Ghost of Peter Sellers to finally make peace.

A two-time Best Actor Oscar nominee for Dr. Strangelove and Being There as well as the beloved comedy genius of classics ranging from The Mouse That Roared to the Pink Panther series in which he played his signature character Inspector Clouseau, Sellers absolutely was one of the greats. But he also had a reputation for being a real handful on sets. That clearly is borne out in Medak’s experience in the making of this film that was shot largely on water, which is difficult enough when all goes well but a real downer when it doesn’t. In this case, the pirate ship sank before they even got the first shot. And the star, Sellers, had just broken up with his latest love, Liza Minnelli, the day before and arrived on set deeply depressed. Not great for a comedy.

Before the 67-day shoot was over Sellers would be faking a heart attack to get out of it (a real heart attack had ended his role in Kiss Me Stupid a few years earlier), and after nearly being stabbed in a sword fight by co-star Tony Franciosa, Sellers refused to shoot their scenes together. Incident after incident happened as Medak revisits the locations and recounts the misery index with a screenwriter friend (Simon van der Borgh) that serves as the glue for the docu retelling of this sordid tale. Medak, who had directed Peter O’Toole to an Oscar nomination in The Ruling Class, among other successes, felt that this movie was going to be the end of that career, and with good reason. By the time it was over, Columbia Pictures refused to release it, claiming several scenes never were even shot. Eventually it turned up a decade later on VHS, and that footage is weaved into this docu, revealing just how far off the rails this thing went.

Among those interviewed is the film’s producer John Heyman, who died in 2017, not long after participating. He is terrific, almost serving as a therapist for Medak, assuring him that over 40 years later it is time to get over this failure, and that they never should have made it in the first place. At different points in the docu, Medak gets highly emotional, so much so that it appears like this all happened to him yesterday rather than in the ’70s. It’s fascinating, honest stuff — a rare glimpse into the filmmaking process that isn’t filtered in any way. The fact is, Medak has had a number of successes post-Ghost including The Changeling, The Krays and Romeo Is Bleeding, but this one seems to trump all the others for him, and it seemed necessary for him to revisit it in a public way before he could exorcise these demons. And you thought moviemaking was a glamorous profession!

The film premiered at the 2018 Telluride Film Festival and was to have been released theatrically last month around the country, including the Nuart Theatre in West L.A. However, in another star-crossed moment for Medak, the pandemic has forced the film straight to VOD this week — the same kind of fate that happened to Ghost in the Noonday Sun. Check out my video review with scenes from the film at the link above.

Do you plan to see The Ghost of Peter Sellers? Let us know what you think.