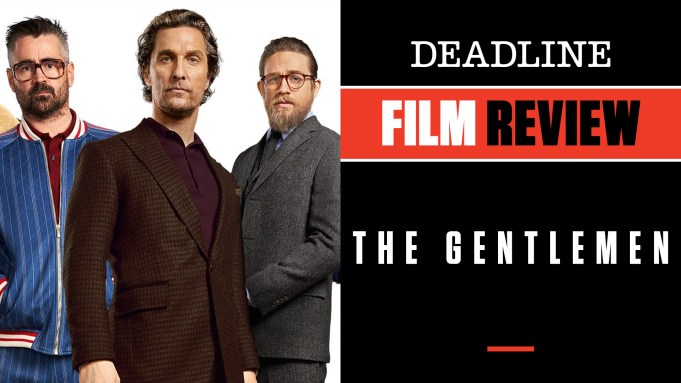 Director Guy Ritchie certainly has one of the more uneven movie careers. Starting with his gritty and funny indie British crime movies from the late 90s like Lock, Stock and Two Smoking Barrels and Snatch, he then kind of lost his way with some bloated major studio efforts: Sherlock Holmes and its sequel, both successful but not very good; The Man from U.N.C.L.E.; King Arthur etc.

Last spring’s Aladdin made a billion and was halfway decent. But now he has gone full-bore back into the crime world, but ratcheted up his indie sensibility with a top-notch cast, including Matthew McConaughey, Hugh Grant, Charlie Hunnam, Henry Golding, Colin Farrell and more, who are apparently not taking any of this stuff Ritchie writes very seriously, nor should we. This is a bit of a lark for all of them, but an amusing one for Ritchie fans, I think. Others will be scratching their heads.

The plot itself is complex because there are so many moving parts and oddball characters thrown in and out of this stew. It is anchored by Grant as Fletcher, a low-level Private Investigator for the sleazy tabloid set who thrusts himself into some seedy goings-on. He’s also trying to sell it as a movie. That leads to a lot of very in-jokes, some even at Ritchie’s own expense when we see a poster from his failed Man from U.N.C.L.E movie hanging on the walls of Miramax Films, which financed this film and is a character in it as well.

At any rate, most of the action and violence revolves around McConaughey as Mickey Pearson, a guy who was successful dealing drugs in college and parlayed that into a hugely successful marijuana business. He navigates with the upper crust, who let him hide his massive stock on their estates. He has now decided to get out and sell the business, which causes all sorts of problems in this underworld, especially with buyers like Berger (Jeremy Strong) and a Chinese guy named Dry Eye (Golding).

There is also the intriguing wife of Mickey, played forcefully by Michelle Dockery, way out of Downton Abbey in this one. Ritchie keeps it all going at his usual cartoon pace, and the rat-a-tat-tat, sometimes witty dialogue comes at you unrelentingly.

The real joy of this one is in its stars, and I was particularly amused by Grant, who is doing his best Michael Caine impression here and almost unrecognizable. The fact that the actor is one of the fiercest critics of the British tabloids make this character especially fun to see. A lot of his scenes are with Hunnam, and they play well off each other.

This is McConaughey’s best outing in a while, following several flops, and he shows his stuff nicely. Farrell comes in for some comic relief as a boxing coach, and Strong also has some good scenes. Eddie Marsan as Big Dave, a tabloid editor, has his moments, too. Overall, Ritchie is back on his game, if that is what you want to see. It isn’t up to his early crime comedies, but it will have to do. STX Entertainment opens it today. Check out my video review with scenes from the film by clicking the link above.

Do you plan to see The Gentlemen? Let us know what you think.