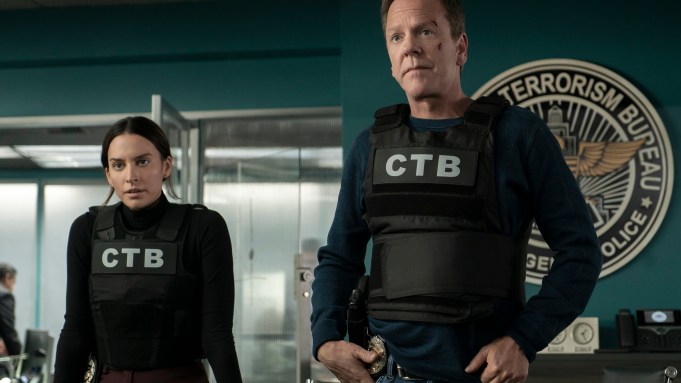 “You know you’re at rock bottom when your parole officer is your best friend,” Mike Ferro says as his buddy/monitor reminds him it’s six months to the day since he was let out of the hole. “Trust me, I’m never do anything that’ll make me go back to prison again.”

Fate has a different plan.

Quibi has released the first trailer for The Fugitive, its shortform adaptation of the Best Picture Oscar-nominated film via the Emmy-winning 1960s TV series. This time, Boyd Holbrook is the presumed perp and Keifer Sutherland is his pursuer, Detective Clay Boyce. And it’s not just that names that have changed.

No one-armed man. No warehouse, farmhouse, henhouse, outhouse or doghouse. This time, the fugitive is on the run after being spotted on camera at the scene of a subway bombing in Los Angeles. The rest of the logline is familiar, though: An innocent man on the run, desperate to clear his name, is chased by the cop who will not rest until he is captured.

The shortform series hits devices on August 3 on Quibi, with new chapters bowing every weekday through August 18. Check out the trailer above and the key art below.