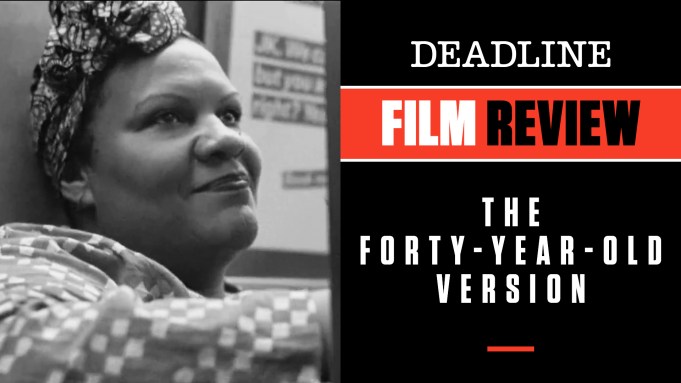 She may now be on the other side of 40 but there is no doubt The Forty-Year-Old Version, the feature film writing, directing, producing and starring debut of playwright Radha Blank, means a star is born, at least as far as the world of indie filmmaking is concerned.

Blank offers up a somewhat fictionalized autobiography of her own journeys in showbiz as she plays a 40-ish writer whose own once-promising career as a playwright landed her on one of those “30 under 30” lists of up and comers. Cut to a decade later and she’s still not reaping the rewards of that kind of recognition, instead teaching a class for young writers while at the same time trying to find her own voice with a new play, Harlem Ave, that examines a couple who run a grocery store in Harlem. That effort is only gestating at an off-off-off-way-off little theatre promoting Black artists.

At the same time she starts fiddling around with rhyming and soon finds herself a natural rapper, a real oddity at her age. Working with a DJ named D (Oswin Benjamin), who soon notices her true potential, she also strikes up a romantic relationship with the man, who is 20 years her junior. A rap called “Poverty Porn” gains attention and she’s off to the races, unfortunately stymied by a disastrous club appearance at one point. Her agent-friend Archie (an amusing Peter Y. Kim) urges her to get more commercially serious about her play and sets her up with a Broadway theatre honcho named Josh Whitman (Reed Birney), who encourages her to make some changes — one being creating a key part for a white woman who talks a lot about gentrification. Radha insists on having a Black female director in return, but ultimately Whitman hires a white woman, and the playwright feels increasingly compromised in delivering a work that she feels she can truly call her own. In other words she feels like a sellout.

It is the competing forces of delivering a “successful” play for Broadway versus one that has meaning, along with a budding career in rap under the Transformers-inspired handle RadhaMUSprime that makes up most of this impressive debut for Blank, and in the end it is all about being true to who you really are, something with which a lot of people will be able to identify.

Shooting on 35mm in black and white, this is undeniably low budget but teeming with energy and centered by a completely engaging and dynamic performance from Blank, who shows real promise as a force in front of the camera as well as behind it. This film was extremely well-received when it played Sundance and you can see why. Blank is a truly original filmmaker, and like the best of them, really seems to know how to bring her voice so effectively alive in a way that will resonate with audiences. It should come as no surprise that she was a writer on Netflix’s TV series version of Spike Lee’s She’s Gotta Have It. This movie reminds us of that breakthrough film of Lee’s, and the kind of showcase where you just can’t wait to see what she comes up with next.

The supporting cast is refreshing and right on target all the way down the line. Birney and Kim avoid caricature where in lesser hands that might now have been the case with these characters. Blank, who has several plays on her résumé, clearly knows how to bring a sly and funny touch in skewering it on screen. Although the film is largely in glorious black and white, Blank incorporates color occasionally to make some story points and it comes off not gimmicky in the least. At 2 hours and 9 minutes the movie is overlong and feels it at points, but the overall experience still had me wanting more of this talented artist and her “coming of age” film.

Check out my video review above with scenes from the film. Do you plan to see The Forty-Year-Old Version? Let us know what you think.