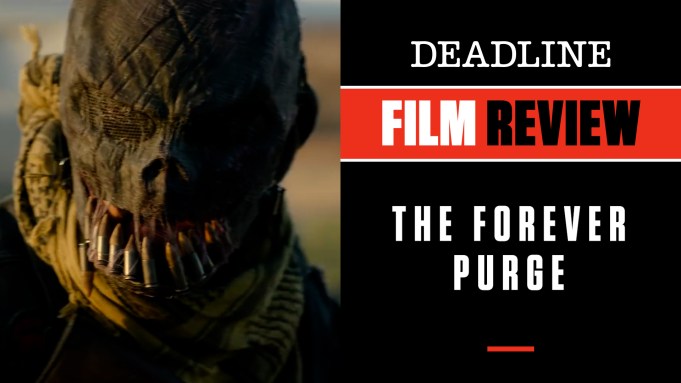 In 2013, when the Universal-Blumhouse horror satire The Purge opened during the Obama era, the premise of a government-sponsored annual night of terror when all murders and violence are allowed to go unchecked and unpunished seemed utterly preposterous, the stuff of Hollywood. But now, with the fifth film in the franchise upon us, the election and rejection of Donald Trump still making headlines and a January 6 insurrection at the U.S. Capitol still fresh in memory, it almost feels like a documentary.

Screenwriter James DeMonaco, who concocted the whole idea, returns to write this latest chapter, The Forever Purge, which takes the idea one step further — and, if you ask me, one step closer to reality. While the whole idea is absurdly amusing, the divisions within America makes the out-there concept of an underground faction of “Forever Purgers” not that implausible. We are almost there right now.

The first film became a solid indie success for low-budget horrormeister Blumhouse and produced sequels with The Purge: Anarchy in 2014, The Purge: Election Year in 2016, and the origin story The First Purge in 2018. All of them focused on the idea of a single night and 12-hour period where any kind of crime goes, no matter how heinous. The problem is how many times can you keep going back to the same well? DeMonaco has come up with a twist that makes perfect sense in a world increasingly full of crazies who have crawled out from under their rocks to create havoc and stoke terror in the name of a new America.

We met the NFAA, aka New Founding Fathers of America, in previous editions and in this one things seem back to normal, the well-publicized “Purge” an annual holiday. As the film gets underway and we see the human focus this time is out at the Texas ranch of the Tucker family, which includes patriarch Caleb (Will Patton), his son Dylan (Josh Lucas) and his wife (Cassidy Freeman) and sister (Leven Rambin). Into their world has come a pair of immigrants, Adela (Ana De La Reguera) and Juan (Tenoch Huerta), whose home in Mexico was burned down as drug cartels forced them to flee to rural Texas where they found work with the Tuckers including empathetic Caleb and his more reticent son Dylan. Purge Day arrives, the ranch is shut down tight, and the night of relentless killing takes place. Daylight arrives and life is back to normal, or so it seems.

This is just a half-hour into the movie, a point where most Purge films would be wrapping up. This one is just beginning as the ever-growing group known as “Forever Purgers” decides every day should be Purge Day and go about mowing down anyone in its path. Thus this so-called government plan to let the citizenry play out their anger once a year has spun out of control. Of course, the original cynical secret government plan for Purge Day was to turn the immigrant and poorer populations into sitting targets in order to rid them from the country. In this sequel, the whole idea of that rabid hate from the extreme right towards immigration in America comes into play, and Adela and Juan along with their friend T.T. (Alejandro Edda) find themselves at war as they try desperately to reach the border back into the safer environs of Mexico.

Although the second half of the film devolves into a lot of shooting back and forth that becomes repetitive and draining, there is much on DeMonaco’s mind here as the real world has started to imitate his cinematic creation. People are complaining about medical costs, immigration is a hot-button topic, white males resent women and minorities for shrinking the job market they have always had to themselves, there is white supremacy and anger at the government running rampant. On the other side of things the Black population is rising up against racial profiling. And all this happening as we overhear a character say, “and they just go golfing.” Sound familiar? The ideas behind this edition also blame the new reality of people getting their preferred news from partisan networks selling false information and inflaming passions. Scary stuff, indeed. Let’s hope the audience for this doesn’t misread the intentions of these filmmakers who clearly believe they are delivering satire mixed with action and horror, and not a recipe to be repeated.

Check out my video review above with scenes from the movie, Do you plan to see The Forever Purge? Let us know what you think.