Continue to Deadline SKIP AD
You will be redirected back to your article in seconds
Skip to main content
October 7, 2021 5:15pm 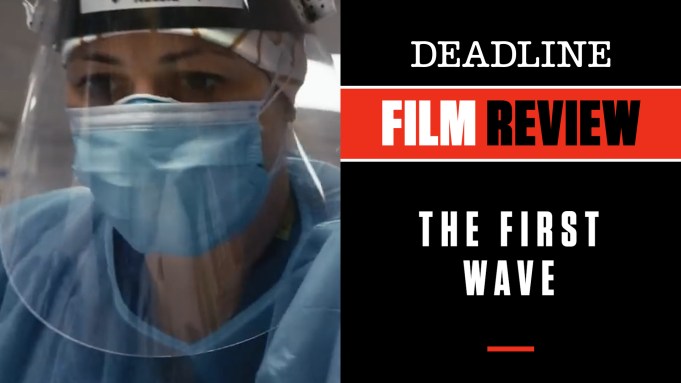 Oscar-nominated and Emmy-winning filmmaker Matthew Heineman never has shied from dangerous and somewhat frightening real-life situations in which to set his documentaries. Cartel Land found him embedded with those on the hunt for dangerous Mexican drug cartels. City of Ghosts saw him in the center of the fight against ISIS in a town beset by terrorism. He even tackled the health care system in Escape Fire, and his latest film returns to that, in a sense — but on an even more urgent level in the harrowing The First Wave, which puts us on the front lines in spring 2020 just as the Covid crisis was spreading like wildfire. In many ways, this film presents a situation even more scary than the film subjects Heineman has been drawn to in the past, and that’s saying something.

Thanks to medical connections made when he shot Escape Fire, Heineman was given extraordinary access to Long Island Jewish Medical Center in Queens, the hardest-hit hospital during the key months of the Covid outbreak in March to June 2020 in New York City, the epicenter of the outbreak in the U.S at the time. Heineman places his cameras in cinéma vérité style as an unobtrusive observer of the front lines of a health crisis out of control. This film focuses on the doctors, nurses, patients and human cost of a pandemic still raging in many parts of the country but at a pre-vaccine time when it looked, well, hopeless. Although not exploitative, we see people die here. Heineman doesn’t sugarcoat what was going on but smartly gives us a close-up view through the eyes of a few people who were right at the center, whether on the side of those trying desperately to save lives or those on the brink of losing theirs.

Appropriately the opening-night film of this year’s Hamptons International Film Festival, The First Wave introduces some unforgettable people. There is Dr. Nathalie Douge, a Haiti-born doctor battling to overcome long odds against a fierce opponent — and someone who also becomes drawn to activism in the midst of it when George Floyd is killed by police in June. This allows Heineman to merge the two events as part of his film in its second half, an enormously effective decision that gives even more urgency to what he has captured here.

There is also a courageous nurse, Kellie Wunsch, who also is given screen time here, much of it emotional and heart wrenching. And there are a couple of patients we follow including NYPD officer Ahmed Ellis and nurse Brussels Jabon, who both might have been afflicted in the duty of their jobs. Jabon recently had given birth but now was fighting for her life. We see Ellis barely hanging on and slowly recovering in small steps. They both offer powerful stories of humanity, the human costs of this once in a century pandemic, and that is ultimately what keeps us watching even as we want to turn away.

This is not for weak stomachs, and festivals like Telluride declined to program the film because it just might make jittery returnees to a live fest that was shut down the previous year due to the pandemic even a bit more jittery trying to rediscover “normality.” Still, I would hope those who have politicized Covid, those who rage against masks and vaccines, those who are in denial even when contracting Covid themselves, see this movie. Heineman is offering a public service by reminding us of the worst of days, but still offering hope of a way out — as long as we heed the warnings.

The First Wave has its world premiere tonight at the Hamptons International Film Festival and also will play during the weekend. It opens theatrically November 19 through Neon and also will play on Hulu and National Geographic networks. The more opportunities to see it, the better. It comes from NatGeo Documentary Films and was produced by Participant and Heineman’s Our Time Projects. Taxi to the Dark Side Oscar winner Alex Gibney is an executive producer.