Continue to Deadline SKIP AD
You will be redirected back to your article in seconds
Skip to main content
July 3, 2018 2:30pm
13Comments 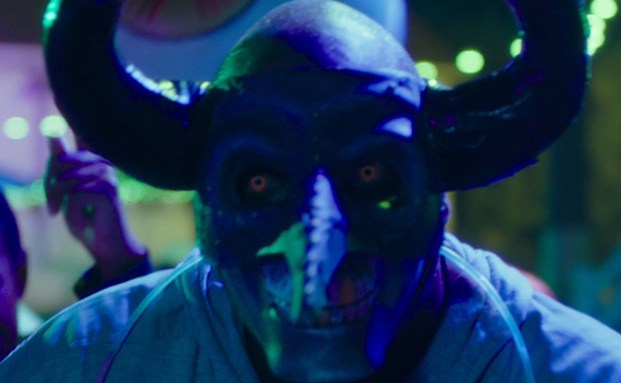 I have dutifully sat through all four of the Purge movies. Do I get a medal for that? Since the 2013 original there has been The Purge: Anarchy (2014), The Purge: Election Year (2016) and now The First Purge opening just in time for Independence Day. The new installment is actually an origin story (as if we needed one) that explains how the whole idea of an annual government-sponsored “holiday” in which all crime and killing is legal for 12 hours beginning at sundown came about. As I say in my video review above, when the concept was actually fresh five years ago, I sort of was entertained by the idea, which then was really just a dressed-up home invasion movie — it seemed like pure science fiction at the time. It later moved to street violence, and then politics.

The latest, which indicates the creative forces behind the series have been running out of ideas, is set in an inner-city community on Staten Island where the newly elected (not Democrat or Republican) U.S. government, New Founding Fathers of America, has declared a local experiment largely among the poor and impoverished African American and Latino citizenry who are encouraged to sign up for the “Purge” and be paid a minimum of $5000 if they don alien-looking contact lenses and hit the streets where anything goes during those 12 hours.

The architect of this idea (Marisa Tomei) designed it as a moment where all morality is dissolved into a base desire to kill your neighbor. It is a social experiment disguised by a nefarious government whose real goal is to set the poor against the poor and rid America of those they consider undesirable. In just five years since this series began, the concept sadly is not as far-fetched as it sounds, particularly in a country currently detaining immigrants in detention centers and separating families from each other before deportation. (On its most basic level, The First Purge could be a wild idea pitched by some nutcase with a White House job.)

Storywise, the cast is led by drug dealer Dmitri (Y’lan Noel), who likes his life of simple crime and does not intend to hit the streets during the Purge. But circumstances turn him into a leader of the resistance especially when ex-girlfriend Nya (Lex Scott Davis), a community organizer, needs his and his gang’s expertise to help when her younger brother Isiah (Joivan Wade) foolishly signs up and immediately gets into some deep sh*t. Dmitri realizes he can’t sit back and watch as the live televised images show government troops and police moving in when things careen out of control.

The fact is that evil Chief of Staff Arlo Sabian (Patch Darrah, doing his best impression of an unfeeling D.C. bureaucrat) needs chaos for this idea to succeed and has secretly sent in mercenaries, the Ku Klux Klan and god knows who else to essentially provoke a race war. This dystopic vision of a hate-driven America was headache-inducing for me this time around, and a bit depressing. Maybe that’s because this little B-horror movie piece of sci-fi isn’t just a low-rent imitation of Clockwork Orange, but that it is now not entirely implausible after Charlottesville, the immigration crisis, and other facts of current life.

Or, maybe that is just what James DeMonaco, the writer-director of the first three movies, would have us think: that this is all more important than just a low-budget box office grab. He wrote this script too (but handed the reins to the workmanlike direction of Gerard McMurray) and does seem to want us to believe the have-nots in America’s poorest communities are ready to stand up and fight for what’s right against an increasingly corrupt government, which told them the American Dream was dead and that it was going to bring it back to life. Whether it is all an allegory in some ways for President Donald Trump’s MAGA — and a backlash to it — is up to the viewer to surmise. Some of the characters, such as Rotimi Paul’s psychotic neighborhood bully Skeletor, are so cartoonish it can be difficult to take any of it seriously, although I admit I was uncomfortable watching much of this exercise, which revels in pointless violence, needless and endless uses of the N-word and a showcase for the biggest, most easily available guns around lovingly photographed in vivid closeups — the NRA won’t be complaining.

The powers behind this may think this blood-fest is also some sort of message movie for our times, and indeed America has changed since 2013, but it seems that with the frequency these movies are being turned out that the Purge franchise also allows the filmmakers to get their rocks off with their own annual cinematic purge. If you have any doubt, stick around for the end credits that feature a commercial for a new 10-part Purge TV series (I thought it was a joke until I remembered Syfy and USA Network are indeed launching it for real in the fall).  If you hoped The First Purge would be the last, think again; it’s coming right to your living room. Happy 4th of July.

Do you plan to see The First Purge? Let us know what you think.