Continue to Deadline SKIP AD
You will be redirected back to your article in seconds
Skip to main content
November 26, 2018 2:29pm 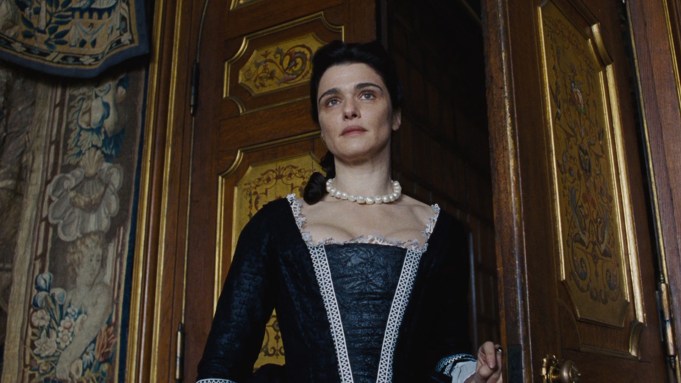 It may be set in the 18th century in the reign of an ailing and flighty Queen Anne, but the movie The Favourite resembles the most is really the back-biting Broadway dramedy All About Eve. This one could be called All About Abigail, which is the name of the character Emma Stone plays in this deliciously amusing romp that provides three stellar roles for three stellar actresses at the top of their game. The provider here is director Yorgos Lanthimos, whose previous films Dogtooth, The Lobster and The Killing of a Sacred Deer don’t prepare us for the tour de farce he pulls off here, completely different in many ways other than the fact there are no creatures in this title like there are in the aforementioned trio.

So what makes it just like a costumed Eve? Queen Anne (played with magnificent lunacy by Olivia Colman, who is taking on another queen in the next season of The Crown) puts all her marbles — at least those she still has — in the hands of Lady Sarah Churchill (a never-better Rachel Weisz). Sarah is her No. 1 companion and confidante, the person the Queen puts in charge of governing England’s business, such as that nasty war with France, while the monarch fiddles around with her 17 bunnies (representing the 17 children she birthed and lost) in a palace that focuses a lot on duck racing and all things pineapple. Sarah even sleeps with her in order to help her husband Lord Marlborough (Mark Gatiss) in his position dealing with the war.

But when those matters also mean that Lady Churchill must leave town to take care of things too, things get a little complicated. That is because Sarah welcomed cousin Abigail, a member of a once noble family now on the outs who literally is dumped out of her carriage into the mud upon her arrival. Deciding to take her under her wing, Sarah gives this new servant special treatment, which only leads to trouble in her absence as Abigail sees the Queen as the ticket to her return to aristocratic favor. Queen Anne takes a liking to Abigail, who soon gets a little too close for comfort to the monarch and finds herself usurping her mentor.

As the aptly named Favourite is all about these three women, the men are pretty much backburner-ed here, though the actors give it the old college try to make an impression — notably Nicholas Hoult in a change of pace as Lord Harley, a rather prissy dressed up character,  and Joe Alwyn (also in another costumer this fall, Mary, Queen of Scots) making the most of his big breakdance-like moment with Lady Sarah in the show-stopping scene at the ball. That scene, by the way, is full of riotous physicality and is just one of many reasons Weisz gets to shine here.

Weisz is sensational, but so are Colman and Stone. The real quandary here is how do you separate the three for the inevitable awards love coming their way? Fox Searchlight has decided it all revolves around the Queen, so Colman is being pushed in lead, while the battle of the “favourites” will be in support against each other there as well. I would just say they are all part of a majestic ensemble that could not be better. Colman does get the battiest scenes and makes the most of them, but Weisz and Stone are every bit her match.

There can be no question the production values are top drawer, with special mention, of course, to the great Sandy Powell’s costumes. The screenplay credited to Deborah Davis and Tony McNamara is perfection. Producers are Lanthimos, Ed Guiney, and Ceci Dempsey. Fox Searchlight opened it Friday in a very limited New York and Los Angeles release to the year’s best per-screen average, meaning it is looking like a breakout hit on the specialty circuit and maybe beyond.

Check out my video review of The Favourite above. Do you plan to see it? Let us know what you think.