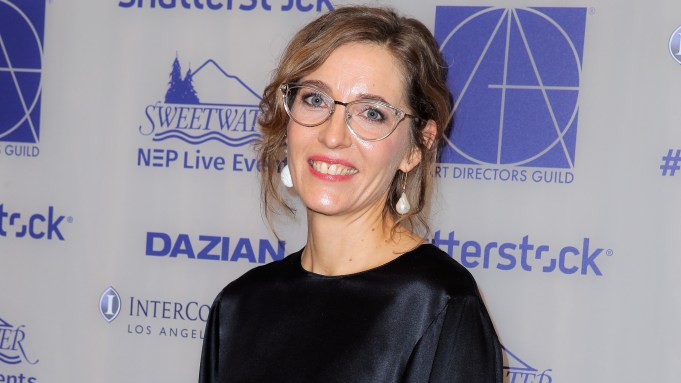 EXCLUSIVE: The production designer behind The Favourite, Fiona Crombie relied on the generosity of strangers, in order to bring Yorgos Lanthimos’ wild vision to life, as she explains in the video above. An 18th century black comedy, Lanthimos’ first period piece pits a servant and a duchess against one another, as rivals for the affections of Queen Anne (Olivia Colman). A daring and unexpected work, the film needed a central location to match its grandeur, finding it in Hatfield House.

A vast country estate in the UK, the Jacobean space became home base for the production. Built in 1611, it brought instant character to the film. “We were so fortunate because they were incredibly generous with us,” Crombie says of the managers of the estate. “We basically moved in for weeks in advance and started building walls and rooms.”

Featuring a sparse color palette and a painterly intricacy of design, The Favourite was a big task for Crombie, involving builds, big and small. While some rooms at Hatfield were simply augmented for the camera, other spaces had to be created from scratch within its walls—for instance, Abigail (Emma Stone)’s “tiny little room,” which set the stage for social climber’s ascent.

Early on, Crombie noted visual decisions made by Lanthimos and DP Robbie Ryan, who would use fisheye lenses to capture “every single bit of every single space.” With this in mind, she knew she would need to put in extra work to direct the viewer’s eye. Finessing the details of Lanthimos’ cinematic space, the designer played with “a lot of repetition of form” to suggest the existence, within the Queen’s palace, of an entire world.

While Lanthimos is famous for his idiosyncratic approach to everything from lighting to rehearsals, Crombie quickly took to the director’s style, in her first outing at his side, delighting in the idea that there was “no fixed rule for any space.”

“There’s a playfulness to the production design,” she says of her work on the film, “and that’s been really rewarding.”

A first-time Oscar nominee this year, Crombie has had a stellar season, picking up prizes from BAFTA, the Art Directors Guild, and the British Independent Film Awards. For a behind-the-scenes look at the creation of The Favourite, from the production designer’s POV, take a look above.