Continue to Deadline SKIP AD
You will be redirected back to your article in seconds
Skip to main content
February 23, 2021 5:49pm 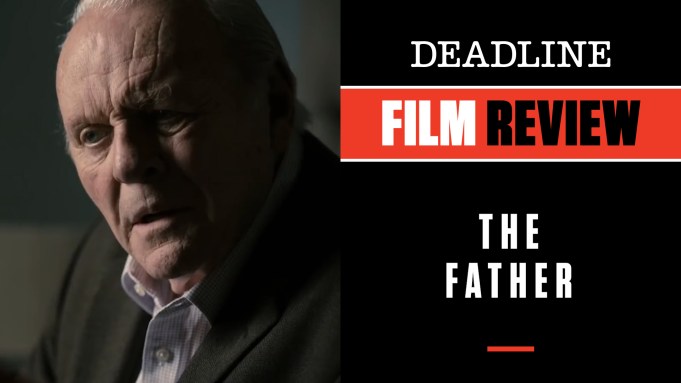 The Father has steadily been on the festival circuit since Sundance 2020, but only now is Sony Pictures Classics finally putting it in release for North American consumption. Audiences are about to find out why this has been one of the most critically acclaimed films of the past 14 months as it slips in just under the wire for Oscar eligibility in this pandemic-affected awards season. There will be no disappointment as this chamber drama, based on Florian Zeller’s 2014 play that won Frank Langella a Tony Award on Broadway (Zeller adapted it for the screen and is making his feature directorial debut) turns out to be anything but a stage-bound affair.

Zeller has employed mind bending technique and some visual trickery to put us directly into the mind of Anthony (Anthony Hopkins), the aging father of Anne (Olivia Colman), as he slips ever so slowly deeper into dementia. Unlike most recent dramas on this subject — movies like Still Alice, which won an Oscar for Julianne Moore, and Away From Her with an Oscar-nominated turn from Julie Christie — this film does not go down the more predictable path in showing the devastating effects of seeing this overtake a loved one. Instead we witness it as Anthony witnesses it, an ever-changing environment that may — or may not — be real, but is apparently reality to this man.

It opens with the arrival of Anne and her conversations with her father. She then slips out of the scene and we soon see Anthony as he talks to a man on the couch reading a newspaper, supposedly Anne’s husband (Mark Gatiss). Then a different woman comes in (Olivia Williams), but is this really Anne? If it sounds confusing it is because we are seeing it all through the eyes of Anthony. Later we meet Laura (Imogen Poots), a new caregiver (the last one couldn’t take it anymore) who seems to be just the spark Anthony needs; he comes to life around her. And then there is Paul (Rufus Sewell), Anne’s actual husband who is campaigning to put him into a home with full-time care. Anne, though ever so gentle with her father, needs to move on with her own life and has told him she is moving to Paris.

As Anthony moves in and around the flat, Zeller and his production designer have changed things ever so slightly but shift the apartment as Anthony experiences where he is at any given moment.  This is all very subtle but really effective from an audience viewpoint. In some harrowing ways it is almost Hitchcockian. Although it is easy to see how this might have played onstage, the camera’s eye really gives it new import and effectiveness. What Zeller has so remarkably done here is to take any semblance of theatricality from this story and play it in another medium where it is actually enhanced. And don’t think because it is a dark subject at heart that The Father is drearily depressing. Instead it is a humane and universal family story, one that could play in any language as this English version of its French origins amply demonstrates.

Hopkins is really magnificent here, an overwhelming performance that never shows its hand and in the final act puts you so firmly in its grasp that you won’t be able to hold back tears — but those tears are earned in a turn that is an acting master class. Colman perfectly counters Hopkins here, an understanding and compassionate daughter but one who also has a life of her own. Among the rest of the cast, Poots and Williams are standouts as well. This is a must-see.

Check out my video review above with scenes from the film. Do you plan to see The Father? Let us know what you  think.