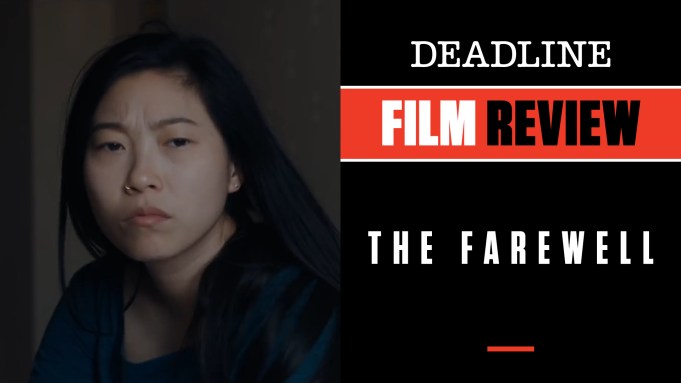 Crazy Rich Asians proved last summer that there could be a huge international audience for a romantic comedy with an all-Asian cast. Now, with one of that film’s supporting cast members in the lead, writer-director Lulu Wang proves there are rich and universal emotional truths along with knowing laughs to be had from another movie (albeit on a smaller scale) with a brilliantly cast story of a Chinese family caught up in a big lie. A huge hit with audiences and critics at this year’s Sundance Film Festival, The Farewell is modest in scope but indeed very rich in the human experience.

Based on events from her own family, Wang tells the story of a Chinese clan who collectively decide to keep a terminal cancer diagnosis a secret from their Nai Nai, the matriarch who has been given months to live but doesn’t know it. The film’s opening card says it all: “Based on an actual lie.” The lie in this case is a whopper as they all decide to stage a phony wedding for a cousin as an excuse to get together to be with Nai Nai one last time without her knowing it is not what it appears to be.

At the center is Billi, the young Chinese-American woman now living in New York, as do her parents (Diana Lin and Tzi Ma). Billi is Crazy Rich Asians scene stealer Awkwafina in a decidedly lower-key performance as a daughter who also is being kept in the dark about her grandmother’s condition because they feel she emotionally is incapable of keeping the secret. She senses something anyway and gets it out of them, determined to show up — even though when she does, her serious and sad demeanor almost prove the lie of the “celebration.” Nevertheless she promises not to tell and the story moves on from there, eventually revealing that virtually everyone has their own little secrets and lies that come out along the way. This is the kind of premise that could have been played very broadly, but Wang keeps it all in check for a much more nuanced touch that makes this ultimately a highly relatable and revealing family tragicomedy that has much more on its mind than the intriguing setup initially lets on.

The cast is uniformly superb, with Awkwafina playing it straight and showing a side of her acting talent we haven’t seen. As Nai Nai, Chinese actress Shuzhen Zhou nails every scene and runs away with the movie — not an easy task with an ensemble like this. Largely known as a TV star in China, this role will give her recognition and likely awards consideration far beyond the borders of her homeland.

The movie actually started as a radio play on NPR’s This American Life, but both Wang and the producers saw great potential as a film, and they were right. Wang, whose only previous big screen outing was 2014’s Posthumous, is a very adept director who manages to make this simple story highly cinematic (shot in widescreen scope) despite the fact it takes place largely in a just a few rooms and blends both English and Chinese languages. The humor, and there is much, comes from the characters put in the position of carrying off an increasingly building ruse.

The viable idea behind it all is a Chinese philosophy that if you know you are going to die, the fear that comes with that knowledge will only hasten that outcome. Wang, who lived through a similar incident in her life, has her own secrets to tell and chooses a unique way to blend real events with the fictional vehicle she creates here in order to share a personal experience. The title, The Farewell, takes on multiple meanings including perhaps a “farewell” to some parts of Chinese life and tradition. This is one of the year’s best pictures.

Producers are Anita Gou, Daniele Tate Melia, Andrew Miano, Peter Saraf, Marc Turtletaub, Chris Weitz and Jane Zheng. A24 puts it in limited release Friday. Check out my video review at the link above which also includes scenes from the film.

Do you plan to see The Farewell? Let us know what you think.