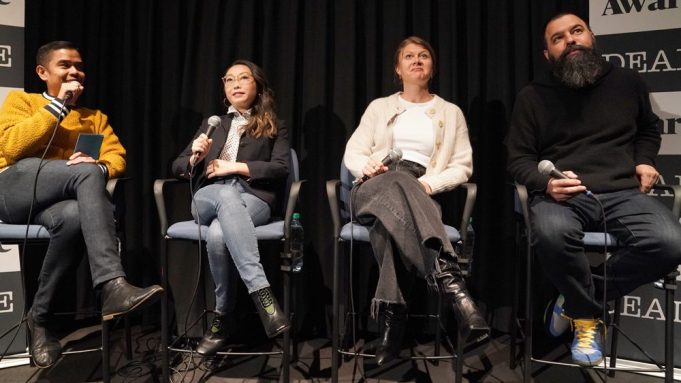 After debuting at Sundance earlier this year, The Farewell has maintained a grasp on Hollywood, garnering critically acclaim, breaking box office records and, most of all, leaving many in tears with the need to call their grandmother right after the movie — or Nai Nai as they say in the A24 drama. During an Awardsline screening, the film’s director and writer Lulu Wang and producers Daniele Tate Melia and Andrew Miano talked about the journey the film has been on since its release and how the film has changed the way Hollywood looks at American storytelling.

Based on Wang’s own life, The Farewell centers on Chinese-born, U.S.-raised Billi (Awkwafina) who reluctantly returns to Changchun to find that, although the whole family knows their beloved matriarch Nai-Nai has been given weeks to live, everyone has decided not to tell Nai Nai herself. To assure her happiness, they gather under the joyful guise of an expedited wedding. As Billi navigates family expectations and proprieties, she finds there’s a lot to celebrate: a chance to rediscover the country she left as a child, her grandmother’s wondrous spirit, and the ties that keep on binding even when so much goes unspoken.

Wang said that she wasn’t nervous about sharing such a personal story, but she did want to be respectful to her family. “I could never tell if a scene or moment was the way I saw it and that’s the way I was writing and directing it or if that’s the way it actually happened,” she said.

She had her real-life great aunt star — also known as Little Nai Nai — star as herself in the movie and she helped ground her portrayal of the family and served as a barometer for storytelling. “It was wonderful to have her on set because she instigated the lie in real life and was around for the real event in 2013 and obviously knows our family really well so I was always able to check in with her to make sure I wasn’t being biased and skewing it through my American naive lens.”

Melia and Miano first heard about Wang’s story on This American Life and were immediately struck by it and felt that it could resonate with audiences. “What I really love is that a lot of people can connect with the feeling of being stuck between two worlds or you don’t feel firmly rooted in one identity or another — I certainly have that in my own life,” said Melia. “That’s one thing I really feel strongly connected to.”

Miano added, “We all have parents; we all have grandparents and we’ve all been probably touched by cancer so the sort of quandary the family faces, while obviously different than a situation that might happen here, I think we all relate to that.”

Essentially, Awkwafina is playing a version of Wang. At first, when Melia suggested Awkwafina for the role, Wang was surprised. At this point, the world hadn’t seen Awkwafina in Crazy Rich Asians yet and Wang had only known her as a comedian and rapper who sang the song “My Vag”. Melia insisted that Wang meet with Awkwafina so she put her reservations aside and did exactly that.

“I am really glad I met with her because she was so passionate about the role and she was very honest about the way the industry sees her and how difficult it is for her to break out of the comedic role,” said Wang.

Awkwafina sent in an audition tape and Wang said she was blown away. She added that she didn’t bring the comedic Awkwafina to the role. Instead, she brought Nora Lum (Awkwafina’s given name), who is a Chinese American woman growing up in New York who was raised by her Chinese grandmother from Beijing.

The Farewell is very much an American film, but Mandarin is spoken in a good part of it. Most recently, many were confused and frustrated that it was nominated for Best Foreign Film at the Golden Globes. At the same time, the film is not eligible as an International Film at the Oscars but is eligble for Best Picture. That said, the film is certainly changing the way Hollywood perceives American storytelling

“When you are in the middle of the change and you are the change, things happen,” said Melia You’re regarded as one type of film in this category and another type of film at this awards [ceremony] — it’s really exciting to be a part of that change…we just set out to tell Lulu’s story.”

“Pioneers are never the people benefiting from the system that they changed, they are part of the change itself,” adds Wang. “That’s what we feel like. If we can start these conversations, it’s going to be messy and it’s not going to be fair always but the film is challenging all of these antiquated categories.”