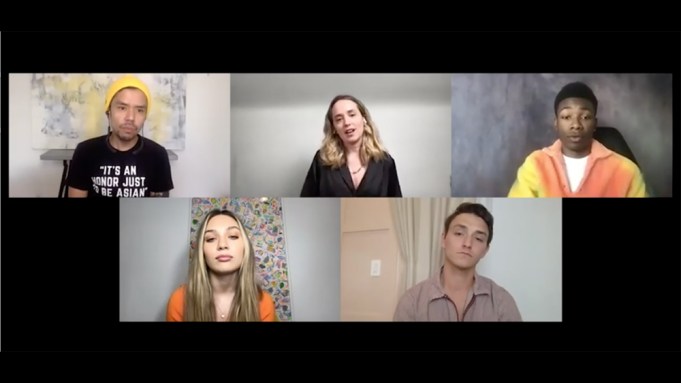 In The Fallout, writer-director Megan Park approaches the grief of a school shooting through multiple lenses. There’s Vada (Jenna Ortega), a once free-spirited teen who is lost in emotion; Mia (Maddie Ziegler), the popular girl who struggles alone till she bonds with Vada; Quinton (Niles Fitch) who loses a brother but tries his best to be strong; and Nick (Will Ropp), who seizes this opportunity to find his activist voice. The film is heavy, but also explores the all-too-common tragedy from all angles, giving us just a taste of the emotional aftermath of such a traumatic event.

For Park, she had been thinking about making based on gun violence in schools for a long time. However, it wasn’t a daily fear of hers when she was in high school. She grew up during a different time period and in Canada so that made her hesitant to write The Fallout. After the tragedy at Parkland, she felt sick — a sick that she hadn’t felt before. She finally said that drove her to tell a version of the story that she couldn’t stop thinking about. She wanted to tell a story about the kids who struggled with anxiety, pain and those who wanted to make change.

“I lived with the characters for a while and once it all clicked I wrote the whole movie in two weeks and the movie came together quickly,” said Park. “It was definitely a personal issue for me that I had a hard time wrapping my head around before I wrote it.”

“I feel that today, this is a new normal,” said Fitch. “This is a thing we’ve seen. We’ve seen kids come out and speak about it. We see their trauma played throughout media. For me, it was easy to tap into that.”

Ropp, who was in Connecticut when the Newtown shooting happened, he remembered being terrified of them locking down the schools where his siblings were attending. “It gave me a deep understanding of this character,” he said.

For Ziegler, she was home-schooled and she admits that shootings weren’t a thought in her head, but when she started to see the shootings more and more and it became this bizarre new normal. “I felt that people just started sweeping it under the rug,” she said. “It is very much that sick to your stomach feeling. I don’t think it’s a normal thing or something they should get used to… ever.”

Ortega, who unfortunately wasn’t able to attend the panel due to her production schedule in New Zealand spoke to Deadline after regarding how she prepared to play Vada. “As an actor I think you tend to get into a habit of turning on and off your emotional mental state for more intense scenes like some of the ones in this film, but it’s also a lot more accessible when it’s an actual unpredictable experience that teenagers my age are living through.”

She added that she has been working on the “awkward” side of Vada all her life and that she prepared for that role by watching videos of kids who went through — which she admits is disturbing. “It almost felt wrong to dig into the subject matter and immerse myself in something I wasn’t apart of or will never be able to fully comprehend unless I’m ever put in that situation,” she said. “I think that just goes to show how critical it is that our country’s leaders give us a solution to this crisis but also the immense support and understanding we need to give our youth that is struggling with this.”