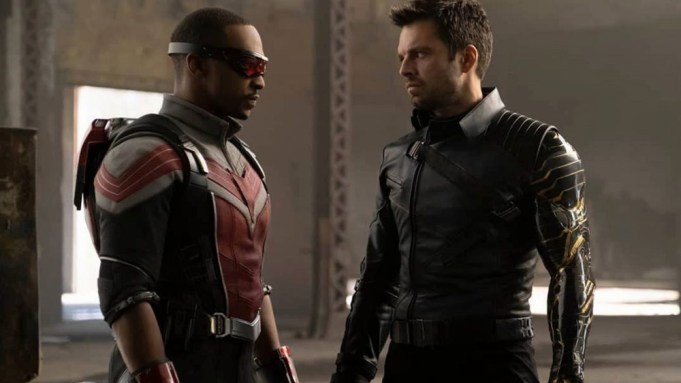 A new trailer for The Falcon and the Winter Soldier flew into and strong-armed its way into this year’s slim lineup of trailers at this year’s Super Bowl  — and it gave us the hype we need for the second Marvel Studios TV series on Disney+.

The trailer shows both titular characters working through their dysfunctional relationship and participating in some high-wattage action. We also get to see the two weird Cap’s shield.

After the wild success of the bizarrely brilliant Twilight Zone-esque of the MCU’s first Disney+ series WandaVision, fans will be chomping at the bit for more Marvel fare as theatrical releases for Black Widow and The Eternals have been delayed. The Falcon and the Winter Soldier is here to quench that thirst when it drops on the streamer March 19.

The new series has Anthony Mackie and Sebastian Stan reprising their roles at the titular Marvel heroes. They will also be joined by some familiar faces including Daniel Bruhl as Baron Zemo and Emily VanCamp as Sharon Carter (aka Agent 13). Wyatt Russell will step into the role of John Walker (aka US Agent) while the cast is rounded out by Desmond Chiam, Miki Ishikawa, Noah Mills and Carl Lumbly. The series is directed by Kari Skogland and written by Malcolm Spellman.

If you are looking for a specific synopsis of what the series will be about — don’t hold your breath. True to Disney form, not much has been said about this new series. All we know is that the six-episode series will take place after the events of Avengers: Endgame. Check out the trailer above to piece together what exactly is in store for Sam Wilson and Bucky Barnes in the new series.