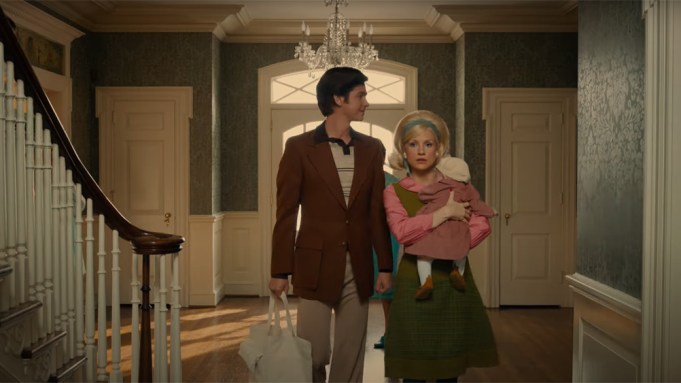 Praise the Lord, Seachlight Pictures has dropped the first full trailer for The Eyes of Tammy Faye. Jessica Chastain and Andrew Garfield star in the film about the rise, fall and redemption of televangelist Tammy Bakker.

In the 1970s and 80s, Tammy Faye and her husband, Jim Bakker, played by Garfield, rose from humble beginnings to create the world’s largest religious broadcasting network and theme park, and were revered for their message of love, acceptance and prosperity. Tammy Faye was legendary for her indelible eyelashes, her idiosyncratic singing, and her eagerness to embrace people from all walks of life. However, it wasn’t long before financial improprieties, scheming rivals, and scandal toppled their carefully constructed empire.

Michael Showalter directs the film based from a script by Abe Sylvia. Chastain produces alongside Kelly Carmichael through their Freckle Films banner with Gigi Pritzker and Rachel Shane of MWM Studios. Fenton Bailey, Randy Barbato, and Meredith Milton will serve as executive producers as well as Jordana Mollick of Semi-Formal Productions and Adrian Adrian Alperovich from MWM Studios.

The Eyes of Tammy Faye is set to hit theaters on September 17.