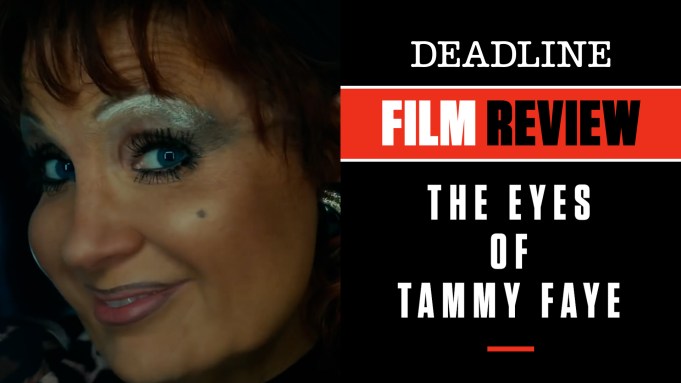 When Fenton Bailey and Randy Barbato made their memorable 2000 documentary The Eyes of Tammy Faye, the title was meant to go far beyond perhaps the surface image of a woman known for wearing way too much eye mascara and being great fodder for drag queens everywhere. It was a surprisingly affectionate account of the misunderstood televangelist, singer and wife and business partner of Jim Bakker, whose financial practices landed the couple, and him particularly, in legal trouble that eventually sent him to prison. The docu charted the beginnings of their union, the rise of their TV fame and network and theme park, and the very public fall of it all.

A few years ago the property fell into the hands of Jessica Chastain, who rightly knew this could be a hell and damnation part to play, and also a biopic that might go well beyond the surface of the public Tammy Faye known to many as tabloid material but who in real life was a person who reached well beyond the conservative roots of the Bakker televised ministry to be a supportive voice for the LGBTQ community (then not known by that moniker) and an understanding voice against the gay plague known AIDS. She would later become an unlikely gay icon to that community, even though on the surface she comes from a religious background that frowned on homosexuality.

The new film, also called The Eyes of Tammy Faye, while not sugarcoating matters, presents a portrait of its title subject in a largely empathetic way, thanks to a wonderfully authentic and rich performance from Chastain, who grabs on to those lashes and never lets go. It had its world premiere this evening at the Toronto Film Festival and will open wide next Friday through Searchlight Pictures and Disney.

Director Michael Showalter and screenwriter Abe Sylvia, working from the blueprint of the documentary, don’t reinvent the wheel here but instead follow the linear rules of standard showbiz biopics as we follow the path of a backwoods girl named Tammy Faye who seems even more friendly and naive that the “Tammy” played by Debbie Reynolds and Sandra Dee in the movies of the period when this Tammy Faye was growing up. She came from a very religious home, even though her mother was divorced from her father, which led to Mom (so nicely underplayed by the great Cherry Jones) being somewhat ostracized by the extreme faction of her church.

Hitting college and emerging into a very different world, Tammy Faye is presented as a friendly and open spirit as the film then follows to meeting and marrying a then-“sinful” rock DJ Jim Bakker (a terrific Andrew Garfield), and joining him in a career-changing nascent venture into religious television. The neat trick that the team would eventually discover was in using faith as the backdrop for conventional style talk shows that tackled all sorts of topics, some shockingly off the usual church conversation. They founded PTL (Praise The Lord), which became a smash hit among the flock in the ’70s and ’80s, even launching a recording career for Tammy Faye, who had 24 albums (and four books) to her name. Eventually, scandals of various stripes forced the unbending archconservative snake Jerry Falwell (nicely played by Vincent D’Onofrio) to push them out right after a very public attempt at public relations failed.

This film covers it all without glossing over the personal troubles, but also sweetly embracing the real person behind the façade. Tammy Faye Bakker was not, at least seen here, the butt of a joke comedians often told, and Chastain delivers a three-dimensional turn, erasing the caricature and emphasizing the character of a natural entertainer who, with a shrewd but misguided husband, marketed faith to the masses and sat on top of the world for a while doing just that. Behind all that makeup was a real person, a sweet soul. There may be those false eyelashes, but there isn’t a false note in this performance.

British actor Garfield was an even bigger revelation for me as when I heard of the casting I didn’t quite see it, but he seamlessly suggests the younger Jim Bakker and then slips effortlessly into the role as he ages. For much of it he and Tammy Faye are quite engaging to watch and both exhibit the kind of easy charm you can believe captivated millions during those years. Among the supporting cast, Mark Wystrach as record producer Gary Paxton shows the man who understood and appreciated Tammy Faye more than Jim. Sam Jaeger plays Roe Messner, Tammy Faye’s future husband, who was instrumental in the financial end of the business that would lead to the fall of the Bakker’s dynasty.

The Eyes of Tammy Faye sets the record straight, gives Chastain another unforgettable role and allows us to see well beyond those eyes and discover the human being Tammy Faye never quite got proper credit for in her own lifetime. That’s the magic of what movies can do. Producers are Chastain, Kelly Carmichael, Rachel Shane, and Gigi Pritzker.

Check out my video review above with from the movie. Do you plan to see The Eyes of Tammy Faye? Let us know what you think.