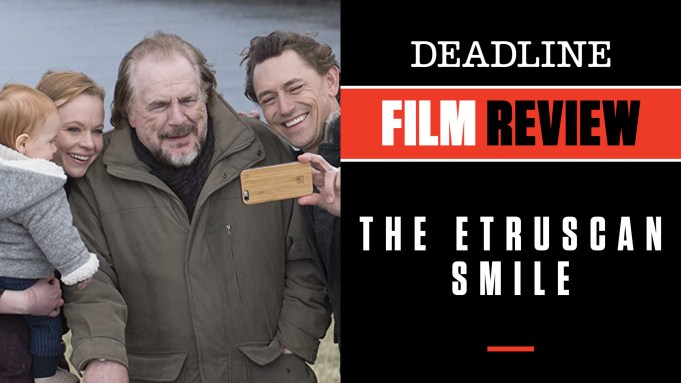 Brian Cox is on a roll. As Logan Roy, the patriarch leader of a dysfunctional global family business in HBO’s Succession, he won the Golden Globe for Lead Actor in a Drama Series in January and has generated huge Emmy buzz. Now the veteran actor has perhaps the richest lead film role he’s ever had as a rugged, independent Scotsman forced to face his own mortality in the heartwarming The Etruscan Smile — which, after a couple of bumps in the road, finally and deservedly is available to a wide audience beginning today.

The movie, produced by six-time Oscar winner Arthur Cohn, had a brief seven-day Oscar-qualifying run in a couple of outlying theaters in L.A. and NYC in November with plans to begin a theatrical engagement in March, which unfortunately coincided with theaters shutting down due to the coronavirus crisis. Its debut on digital, VOD, Blu-ray and DVD still is set for June 16, but in order to help the theaters in which it was booked, along with others, the film’s distributor Lightyear Entertainment has teamed with Film Movement and Arthouse Convergence to offer up The Etruscan Smile as a virtual theatrical experience with tickets costing $12. Proceeds will be split with the participating theaters, now numbering 80 and climbing, around the country.

It is an uplifting and worthwhile film, and I highly recommend that people make the effort to seek it out in the comfort of their own home. And for Cox’s fans, it is a real gift to see this superb actor — so good in past indies like L.I.E. and numerous other movies — finally get a major mainstream film role that really shows off his considerable talents in a way we haven’t seen before.

Cox plays Rory MacNeil, a bit of a cantankerous Scotsman living in largely isolated splendor in the Hebrides Islands, far apart from his own family in the States and able to do whatever he wants — including a daily skinny dip into the ocean, rain or shine. But serious medical problems creep up on him and force him to travel to San Francisco, where he seeks treatment and is forced to move in with his estranged son Ian (JJ Feild) and more compassionate daughter-in-law Emily (Thora Birch), along with their newborn, Jamie — and his grandson brings out a side of Rory no one knew existed. His instant bonding with Jamie counters his still-contentious relationship with Ian, while also allowing Cox to show off his sweet side.

But Rory — resistant to his own dire health situation and something of a fish out of water in the city — continues his to go his own way, swimming naked in the San Francisco Bay or wearing his kilt to a fancy gala. He also strikes up a bit of a romantic relationship withClaudia (Rosanna Arquette), the proprietor of a museum, which begins on rocky terrain but heats up considerably before the realities of his life get in the way.

Although a bit old-fashioned in style and squarely in line with the kind of warmhearted movies Hollywood used to love turning out, this one is a true international effort, with Israeli directors Mihal Brezis and Oded Binnun, the Swiss producer Cohn and its Scottish star Cox. Add in Spain’s Jose Luis Sampedro, who wrote the book on which it is based, and its original setting of Milan now switched to Scotland and SF, and you have quite the mix. Ultimately, though, it is a universal story of love and family, life and death and birth that make this a true winner for everyone.

Among those in the fine supporting cast is Peter Coyote, who enlists Rory in a linguistics test to examine his natural, and rare, fluency in the Gaelic language. Cox pulls that dialect off with seeming ease, another example of why this often-underrated star is one of our best living actors.

Check out my video review with scenes from the film at the link above.

Do you plan to see The Etruscan Smile? Let us know what you think.