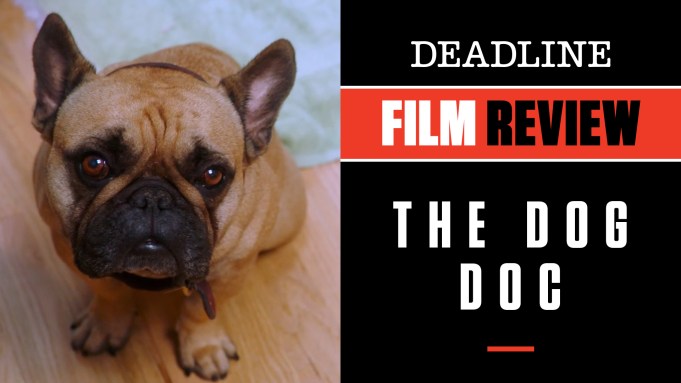 It was less than two weeks ago when I saw a trailer at a local Los Angeles art house theater for new documentary The Dog Doc. It seems like an eternity ago, but though the theatrical release plans for March 20 fizzled with the closure of theaters due to the coronavirus outbreak, the good news — the very good news — is that this heartwarmer of a picture has been made available on VOD. And if there is any justice, it will find a much larger audience, considering that pretty much everyone is confined to home right now.

The title works cleverly on two levels, but the actual dog doctor in this case is Dr. Marty Goldstein, a pioneer of integrative medicine that combines conventional veterinary techniques with cutting-edge alternative medicine. His patients are essentially the dead-end kids, the cases deemed mostly hopeless by others in the profession until they wind up at Smith Ridge Veterinary Center, a holistic care facility for our four-legged friends in South Salem, NY. Director Cindy Meehl was given unprecedented access to Goldstein and his clinic over the course of three years and in that time trained her cameras on numerous cats and dogs (with the emphasis, at least in the final film, firmly on the latter) who had basically been given their last rites before discovering the “Dog Doc” who uses his unconventional methods to pull off some pretty impressive miracles.

Meehl is no stranger to the relationship between humans and animals as she also was the creative force behind the terrific 2011 horse-whisperer docu Buck, and she works her magic again here focusing on a few chosen patients and their human owners. For those who are squeamish about seeing any animal in distress or suffering, beware — because a film as honest as this can’t avoid it. But Meehl keeps that to a minimum, though not all survive. Also to her credit, she makes sure the naysayers who don’t believe in Goldstein’s approach also are represented, however briefly, and mostly in flashes of newspaper stories that throw around the word “quackery.” This is defiantly not quackery, and as the film shows, Goldstein definitely is on to something and has dedicated his life and career to making it happen.

As much as the movie is targeted on the plight of the animals, it equally zeroes in on the emotional trauma of their owners. This connection between the two is movingly shown, particularly in one of the spotlighted cases involving Waffles, a sickly dog who was abandoned on a roadside with his mother and brothers and sister. They turned out to be fine, but Waffles was completely jaundiced when found and lethargic to the point of incapacity. The flip side of his illness is reflected in the drain on his loving owners who will do anything, and spend anything, to give him a quality of life.

The same goes for other key stars in the movie including Mulligan — a puppy with problems — Scooby and Petey, among many more. Petey, plagued with devastating cancer that has formed under his mouth in a big lump, is a uniquely wrenching example of what these empathetic vets must deal with all day long. Do you operate and cause severe deformity? Do you defy the odds at great cost and experiment with possible cures or treatment? Do you make the heartrending decision to end a life? All of this is shown as if in real time, and it is enormously touching to experience.

Meehl brings it all together while keeping a focus on Goldstein as he prepares to deliver a seminar to students in the hope of spreading the word and inspiring future generations to carry on his mission. His own home life, relationship with his wife — who works with him — as well as kids, and their menagerie of animals also are featured. If there is an Oscars at the end of this crisis year, this is a movie that deserves to be remembered.

Alice Henty is the producer. FilmRise is behind the release. It is available through Amazon Prime and Apple TV, among other outlets. See it however you can. Check out my video review above with scenes from the film.

Do you plan to see The Dog Doc? Let us know what you think.