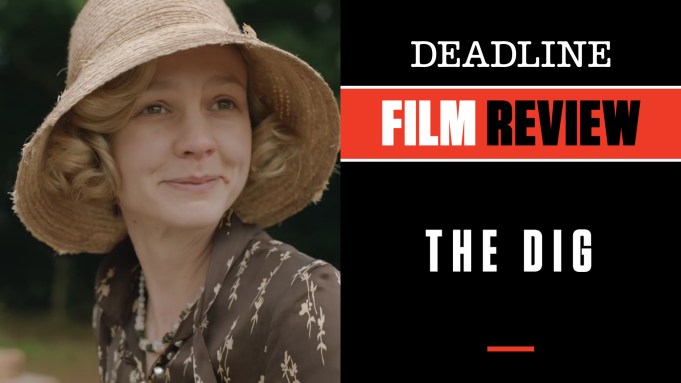 Netflix has been touting a number of fine films this awards season, an embarrassment of cinematic riches from which to choose, but now with the less buzzed-about The Dig, which starts streaming Friday, it has yet another little gem on its hands. If Oscar and BAFTA voters choose to check it out they won’t be disappointed, and certainly the teaming of Carey Mulligan and Ralph Fiennes in two fine performances just might bring the right amount of attention to do just that. This one is a sleeper sneaking in just under the wire and making a strong impression.

The Dig, from director Simon Stone and screenwriter Moira Buffini (based on John Preston’s book), is on the surface at least a stately British drama, underplayed with just the right amount of reserve to slowly rope us in, and then keep us enthralled with this true story set in 1939, just at the start of the British entry into World War II. Mulligan plays Edith Pretty, a widow who is owner of the estate in Suffolk right alongside what is known as the Sutton Hoo, and who hires an unheralded and under-appreciated farmer and archaeologist named Basil Brown (Fiennes) to excavate what could be a major find of a burial chamber there. As the job progresses, and the relationship between the pair turns into friendship and respect, it becomes clear that this “dig” is uncovering something far more significant: an Anglo-Saxon ship predating the Vikings that it seems was hauled from the ocean and implanted in the ground as a tomb for some sort of king.

Brown is definitely the kind of proud professional who puts his all into a job, this one taking on greater significance for him — and even risking his life when, in a harrowing scene, he is buried alive under an avalanche of dirt. Even that can’t stop him, or the offer of a job for a Roman excavation from associates of his at the Ipswich Museum who took him for granted in the past, never giving him his due. Things get complicated when Charles Phillips (Ken Stott) turns up and basically takes charge, declaring that what Brown has been unearthing is of great value to his British Museum and putting it all under the control of the Ministry.

Through it all Pretty is supportive, her own life affected by grief and an increasingly debilitating heart condition, as well as by others who come on to the scene. They include her highflying cousin Rory Lomax (a lively Johnny Flynn), plus Phillips’ assistant Stuart Piggott (Ben Chaplin) who has brought along his young wife Peggy (Lily James), an archaeologist proving of value to the project more because of her slight figure being useful in the dig’s more delicate needs than any real talent for excavation she possesses. The latter’s marital problems, more concerning to Peggy than Stuart at first, provide a subplot as she privately questions his sexuality after his seeming disinterest in the bedroom and carries on secretly with Lomax in a simmering romance that begins to boil. Brown’s feisty wife May (a fine Monica Dolan) also turns up, ever so supportive of her husband’s talents even when others aren’t.

Still at its heart this nicely produced drama with Mike Eley’s exquisite cinematography of the English coastline is a terrific showcase for the talents of Mulligan, so good currently in a wildly different role in Promising Young Woman, who brings real heart and soul to this proper land owner but never anything less than regal in her own way. Fiennes gets one of his best screen roles in some time as a man, proud of his work and confident in his abilities, determined to finish what he started. The pairing could not be more perfect. The movie is one with nice rewards as it explores not just the treasures buried in plain sight, but also the humanity deep inside us if we choose to find it.

Check out my video review above with scenes from the film. Do you plan to see The Dig? Let us know what you think.