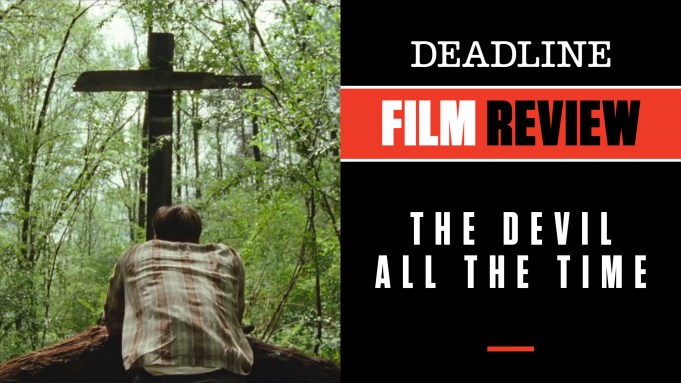 It is a good thing there is a lot of narration explaining exactly what is going on from moment to moment in Netflix’s The Devil All the Time, because otherwise we wouldn’t be able to tell the bad guys from, well, the really bad guys. But in adapting Donald Ray Pollock’s 2011 novel, Antonio Campos (who also directed) and Paulo Campos are so wedded to the prose of the book that they actually hired the author himself to do all the voice-over; it is the closest thing to a cinematic audiobook I have yet seen. Normally I would say I am not a fan of movies that feel inclined to tell us everything a character is thinking and doing, rather than letting them do that themselves, but after a while you get used to the device, and Pollock actually has just the right tone to pull it off.

What makes this quite violent and often vile meller work as well as it does though is an A-list cast who gives it their all to sell this sordid stuff of a backwoods Southern setting where everyone appears to be indeed ingesting the Devil all the time. Just about every main character involved takes a walk on the dark side, in some cases the darkest side, of human nature. What Campos, a director drawn to dark subjects anyway (After School, Simon Killer, Christine) has cooked up is a stew of cynical Faithmeisters, serial killers, mentally damaged war veterans, their affected offspring, corrupt cops and delusional Bible belters. We have seen the stereotypes trotted out in various Hollywood versions of this kind of entertainment many times, often with racial overtones at the center, but in this case it is white guys vs themselves who behave in turn-your-head-inducing bloodletting in the name of God and all that is moral. Or not.

Spanning the years 1957-1965, the film sadly has resonance for now as this type of reprehensible human being is currently on display in this country. The actors are so good here they avoid turning their characters into one-dimensional heathens so that we can see beneath the surface, and it is awfully muddy down there.

Fortunately the narration helps guild us through this slog of deplorables beginning in ’57 with  Willard (Bill Skarsgard), a World War II vet so disturbed by the slow-burning death of an Army buddy he took to violence back home, influencing his young 9-year-old son Arvin (Michael Banks Repeto) even to the point of murdering the kid’s dog. The father just can’t help his rage. Eventually the older version of Arvin (Tom Holland) is living with relatives and stepsister, Leonora  (Eliza Scanlen), whom he vows to protect from local bullies, and does by taking his late Dad’s demons to heart and beating them to a pulp. This vengeance eventually finds its way to the new preacher in town, a predator disguised as Elmer Gantry and going by the name of Preston Teagardin (Robert Pattinson), who seems also to enjoy seducing teen girls. The ultimate showdown between Arvin and Teagardin in the preacher’s empty church is a keeper.

Outbadding the bad guys is local sheriff Lee Bodecker (Sebastian Stan at his most vicious), who has ties to a crucial time in Arvin’s young life, as well as to (wait for it) travelling serial killers Carl Henderson (Jason Clarke) and Sandy (Riley Keough), who pick up unsuspecting young men and let Sandy seduce them into sex as Carl watches with his trusty camera. Then they murder them in gross fashion. It makes the real similar sexual three-way news of late seem like the stuff of Disney by comparison, but the setup for the sex is still recognizable even 55 years after this fictional tale is set.

The Devil All the Time is about people who, as President Obama once described them, “cling to their guns and religion.” Although a period piece through and through, this is a movie that sadly still has relevance in perhaps unintentional ways if you read things into it like I did. It is never boring, and the cast is terrific, with Holland erasing Spider-Man from your mind instantly and Pattinson again showing an admirable penchant for taking on risky and surprising roles. Everyone is good though, and there are nice brief turns from a near-cameo by Mia Wasikowska and more substantially Harry Melling as Lenora’s parents who come to endings best left undescribed.

Check out my video review above with scenes from the film. Do you plan to see The Devil All the Time? Let us know what you think.