Continue to Deadline SKIP AD
You will be redirected back to your article in seconds
Skip to main content
January 28, 2019 11:28am
1Comments 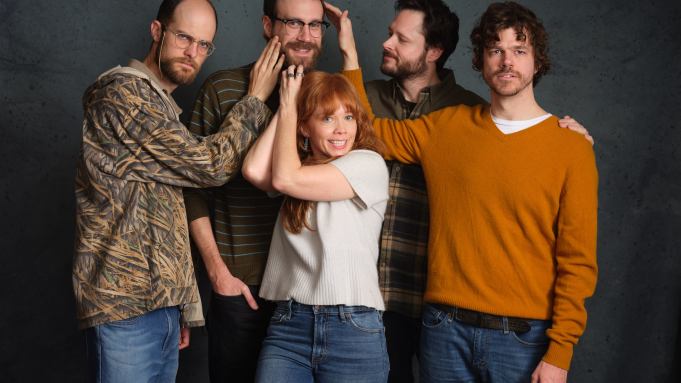 If there is one question that would pop up when you see the Sundance title The Death of Dick Long, it would be “Where does the suggestive name “Dick Long” come from?” When asked, director Daniel Scheinert, writer Billy Chew and actors Andre Hyland, Michael Abbott Jr., Virginia Newcomb will tease you and say that you would just have to watch the movie to find out. All of them stopped by Deadline’s Sundance Studio to talk about the comedy.

The film and its premise seems on-brand for Scheinert, who is one-half the directing team that brought us the bizarrely heartfelt Sundance pic from 2016, Swiss Army Man. Written by Billy Chew, follows the story of the titular Dick, who dies after a late night band practice. His bandmates Zeke (Abbott Jr.) and Earl (Hyland) don’t want anybody finding out how — but news travels fast in their small Alabama town. The pair tries to cover up their tracks but they don’t do a good job doing it as Zeke’s wife (Newcomb) his daughter are getting more and more suspicious.

“The inspiration was wanting to a surprise in it that would shock people and that’s what the genesis was,” said Chew in Deadline’s Sundance studio.

Considering Scheinert, Chew and Newcomb are from Alabama, the Southern state was easily a source of inspiration for them — but it wasn’t always set there.

“Alabama inspired the movie but the original drafts didn’t say it was in Alabama,” said Scheinert. “When we started about making it together, I thought this is where I want to make it and I wanted to go there and let everything we sen bleed into the film because it’s a provocative film and I wanted to go somewhere I knew.”

As for the name “Dick Long”, a moniker like that is pretty standard for Chew when it comes to his screenplays. Scheinert points out that Chew has a collection of absurd characters names for his scripts.

“I just like characters to have names that are Dickensian,” laughs Chew. “The name itself is a descriptor of who the character is.”