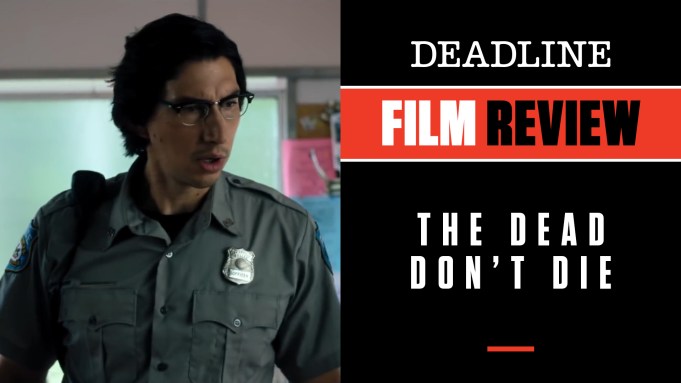 The Walking Dead has sucked all the life out of the zombie conversation in recent years, but that hasn’t stopped director Jim Jarmusch from diving right in. The only problem is, other than a couple of political jabs, there is nothing much new to say about The Dead Don’t Die, a largely lifeless comic take that is saved as far as it goes by a terrific cast that only Jarmusch could put together based on this script.

In what really amounts to nothing more than a deadpan version of an old Abbott and Costello-type movie, Bill Murray as Cliff, the police chief of a sleepy little town called Centerville, USA, and his squad car partner Ronnie (Adam Driver) patrol the place for any problems. But despite minor skirmishes between the likes of Hermit Bob (Tom Waits) and Farmer Miller (Steve Buscemi) — the latter wearing a red cap that says “Make America White Again” — there isn’t much going on until some sort of global environmental “polar fracking” disaster erases nighttime and keeps the town lit up 24/7, This unleashes the local dead, who rise from the cemetery to start a zombie invasion that causes great havoc and lots of bloodletting, including from the likes of Iggy Pop (!), who tears up the diner with Sara Driver.

Of course this all causes concern for the cops, who also include Chloe Sevigny as Officer Mindy Morrison, but it does keep the undertaker Zelda Winston busy. As played outlandishly by the always great Tilda Swinton with Scottish accent, samurai and a previous ZIP code from another part of the universe, she gets to lop off lots of heads with intense determination. Selena Gomez turns up with other teens, driving around in an old Pontiac. Danny Glover, Caleb Landry Jones, Carol Kane and others walk in and out, and there is a lot of general mayhem, but thankfully Murray and Driver keep it grounded, knowing just how to deliver patented Jarmusch dialogue with muted expression.

The best bits come as Driver breaks the fourth wall and starts referring to his director’s script in how everything eventually will turn out. I don’t have to tell you that because, really, what does it matter? This kind of thing lives or dies on the strength of its cast, and in this case that might be enough to stir some initial interest. I have to say, however, that it is a disappointment coming from Jarmusch, a quirky director to be sure but one capable of greatness. His previous film, Paterson, which starred Driver as a bus driver, was perfection and landed on my 10  best list for the year. This one won’t.

Like so many of his films, including a better genre romp about vampires of a few years ago called Only Lovers Left Alive (also with Swinton), The Dead Don’t Die was in competition last month at the Cannes Film Festival, where it got the prestige opening-night slot. I have to say, despite some fun moments and some intriguing points about climate change, I almost forgot the thing by the time I got to the bottom of the Grand Theatre Lumiere steps. I had a good time watching some fine actors do their best to take it all seriously and get a few laughs along the way, though. But this is decidedly minor fare from the man who brought us Broken Flowers, Coffee and Cigarettes, Night on Earth, and Stranger Than Paradise among others.

Producers are Joshua Astrachan and Carter Logan. Focus Features opens it semi-wide on Friday. Check out my video review at the link above that includes scenes from the movie.

Do you plan to see The Dead Don’t Die? Let us know what you think.