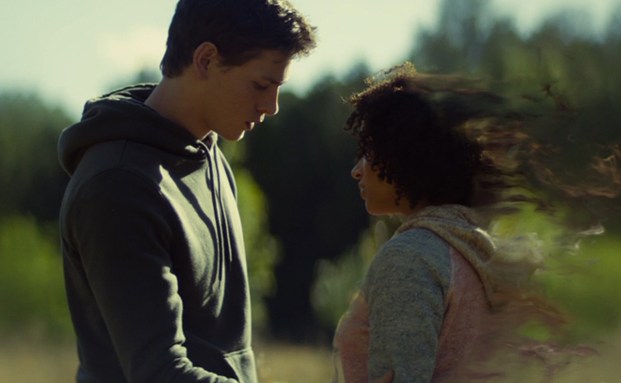 Strictly for young fans of teenage dystopian nightmares, this umpteenth adaptation of yet another YA would-be trilogy offers nothing new you haven’t already seen played out in numerous installments of the likes of The Hunger Games, Divergent, Maze Runner, Twilight and on and on. Coming, hopefully, near the tale end of this particular cinematic craze, The Darkest Minds explores the aftereffects of yet another disaster in a dystopian vision of America where most of the nation’s youth have been wiped out by the mysterious pandemic known as IAAN. The 10% or so who survive, though, suddenly have new powers defined in intensity by the color they are assigned. Blues and Greens are relatively harmless, but Oranges and especially Reds can be lethal and a threat to the government that hunts them down.

At the center of this story — the first in the trilogy (of course) of books by Alexandra Bracken — is Ruby Daly (Amandla Stenberg), who discovers that as a newly minted Orange she has incredible powers of mind control and needs to keep that under wraps for her own safety. Rescued from her concentration camp by the kindly doctor Cate (Mandy Moore) and taken under the wing of the so-called Children’s League (or something like that), she soon hooks up with a group of others in her predicament. They include handsome Liam (Harris Dickinson), who has leadership abilities and telekinetic powers; brainy Chubs (Skylan Brooks); and little Zu (Miya Cech), who never utters a word but sets out on the journey anyway as they try to evade authorities. Eventually they find a camp to hang in and a new comrade (they think) in Clancy (Patrick Gibson), the son of the U.S. President (Bradley Whitford) who, as it turns out, is one of the lucky young survivors. But there is more to him than meets the eyes, as Ruby soon finds out. The adventure continues as they try to outwit those who would do them wrong and as Ruby must decide where this is all leading her.

Animation director Jennifer Yuh Nelson (Kung Fu Panda 2 & 3) makes live-action debut but can’t avoid the cliché-ridden script by Chad Hodge that pushes all the buttons of this doomed world but fails to find anything fresh to say. Yes, I get that I am definitely not the target audience here, but that’s not an excuse for this paint-by-numbers attempt to cash in on a fading genre. Enough is enough. All of these movies seem to be descended from the far superior and complex Lord of the Flies, which had the good sense to be one book and one movie, not three, as Darkest Minds is clearly set up for a sequel that likely never will happen.

The actors do their best, and represent careful diversity in casting, but look like they belong on Disney Channel. Stenberg is fine, as she was in Hunger Games, but the weird orange eyes bits she has to do look like a bad imitation of Children of the Damned. Dickinson is fairly one note, while Brooks and Cech do what they can with nothing. Moore’s kind doctor is thankless, especially considering the meaty role she has on This Is Us, and Whitford offers an unflattering turn as the slippery president, perhaps the one thing that most correctly mirrors our current reality. 20th Century Fox releases it on Friday.

Do you plan to see The Darkest Minds? Let us know what you think.