Continue to Deadline SKIP AD
You will be redirected back to your article in seconds
Skip to main content
August 27, 2020 2:00pm
1Comments 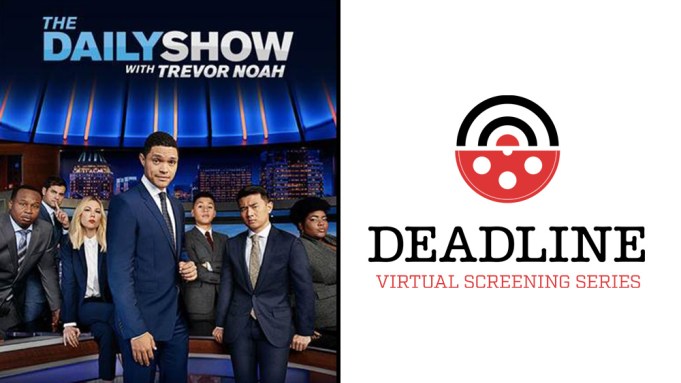 The Daily Show With Trevor Noah is on a roll. With six Emmy nominations this year it has received the most since Noah took over from Jon Stewart, and that includes first-ever writing and directing nods under his leadership as well. Of course, those noms include Outstanding Variety Talk Series again, and this year the Comedy Central series has perhaps the best chance ever to land in the winner’s circle since Stewart’s decade-long run of Emmy victories.

Among the reasons is the show has exploded on social media, expanded to 45 minutes nightly during the pandemic, was the first to be back in production in March and the first to broadcast from home (under the new moniker The Daily Social Distancing Show With Trevor Noah), and has become the No. 1 daily late-night show with males ages 18-34. It also has gotten serious news-breaking attention from first-ever late-night show interviews with the likes of Dr. Anthony Fauci and New York Gov. Andrew Cuomo  at the height of the COVID storm. An interview with Democratic Presidential nominee Joe Biden went viral when Noah asked whether he thought Donald Trump would try to steal the election.

The list of achievements this year go on and on, including over $2.5 million in charitable contributions, and a new collaboration on polling with YouGov among many other innovations.

On Tuesday night for the Deadline Virtual Screening Series, I welcomed in conversation correspondent Roy Wood Jr.  writer/supervising producer Zhubin Parang, director David Paul Meyer and supervising producer Elise Terrell. Here are some highlights of how they view the challenges of doing a show with a lot of moving parts, all from home in the midst of a worldwide pandemic.

“I would say there’s definitely been a shift in how we make the show to it being very intensive in terms of graphics and postproduction. Our editors, you mentioned, they fully deserve that nomination, they are heroes. They pull off miracles every day, to be honest, just to get the show made, and I’m going to be honest with you, they bail my ass out a lot, so I’m very appreciative of them. I need to send them some gifts, I have that written to do, so it’s a lot there. There’s a lot of moving pieces now because of what we do in post, and I’m actually…usually this is when I would be screening cuts of the show right now, but I had to step away to do this. This is how much I love the Deadline Virtual Screenings here.”

“Yeah, I mean, you know, as soon as we left the building in mid-March, we knew that it was going to be a long time before we were back in the studio but that, you know, we are so connected to our audience, and we knew that we immediately would have to pick up and keep going because everything is still going on, the election is still charging towards us, and then, of course, everything else that’s happened over the past few months. So we knew that there would have to be obviously a lot of changes technically, but you know we were the first back on the air in a linear format, and that was something that was really exciting for us because there were a lot of technical hurdles. Our team, we are so blessed to work with such incredible talent from writers to editors to everyone behind the scenes tech-wise, so everyone just sort of pitched in and figured out, OK, well, how are we going to make this work, what do we need to do to make it work, and we just sort of sat down and figured it out, and every day, it’s still a learning process.  Going to 45 minutes was a big jump, now this week and last week, we’re doing five nights a week, which is something that we’ve only done one other time in our history, so it’s been a lot of growing and a lot of just trial and error, but we all are just so excited to still be connecting with our audience both linearly and on social and everything.”

“It’s actually been too much of a blessing these last four years. It used to be that we did not have news cycles that would span every 20 minutes the way that we’ve had for the last four years, and in a lot of ways we analogize it to a firehose at the show. But you know, the Trump administration just produces so much news all the time that if you’re not careful you actually can end up only doing Trump stuff, and that becomes very boring very quickly, so we’ve had to learn as writers to try not to go to Trump unless he requires our attention because there’s so many other things going on in the world that aren’t related to Donald Trump, like the Black Lives Matter Movement in the United States, the entire planet’s worth of news that goes on in Europe and in Asia and Africa, and especially that with all the Trumps that are happening around the world like in Brazil with Bolsonaro, with Orban in Hungary, there’s a lot to talk about that’s not Trump, and we’ve had to learn how not to do that. Trevor’s luckily very used to characters like Trump being from South Africa and being aware of the world, so he is able to look away from the burning dumpster that the Trump administration is to say this is also important, this is also important, and I feel like we’ve been very lucky to have a host who is able to direct our attention to other things that are important, and it’s been great as writers to be able to focus on stuff. The comedy comes a lot, very fast and very hard, and sometimes, it’s a little too much, actually.”

“The thing, to go back to what Zhubin was saying about how Trevor’s able to have this perspective that’s a little bit more calm and metered and more analytical, it gives me the freedom to come in sometimes and really just embrace the sheer emotion of something because there’s days where Trevor can be metered on something, but I’m legit angry, and it’s a cool thing to have that balance because I think somewhere in that balance is where we’re able to find the jokes, and I think the correspondents, our job, you know, and I think this is where The Daily Show is able to differ from a lot of other shows and late night is that our job is where Trevor can put emotion to a story, the correspondent’s job is to put a face to it, and so we’re able to meet and interact with people on the street, be it man-on-the-street or actually going out and doing a hard news story, and the thing that’s really dope about what’s been happening during the pandemic is that we really haven’t missed a step. The only adjustment that I had to make, as a correspondent, when it came to covering stories during the pandemic is that I just needed better Internet feed. I figured that out day three, and so that’s been the only real adjustment we’ve had to make, you know, but performatively, the job’s been the same.”

Check out my conversations in the video above with these Emmy nominees who put The Daily Show, or now The Daily Social Distancing Show, together on a daily basis.