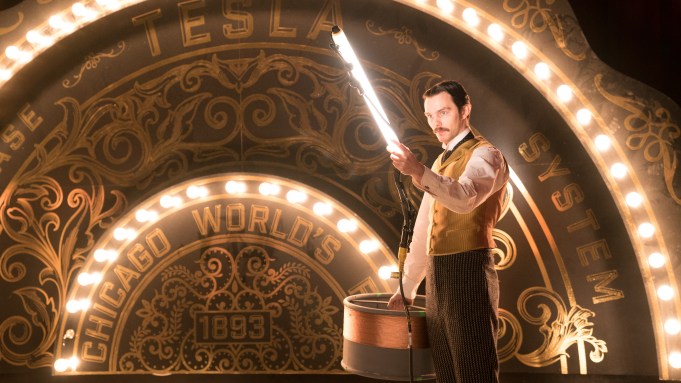 History hasn’t exactly been kind to Nikolai Tesla. First he essentially comes up third in a three-man race with Thomas Edison and George Westinghouse, then The Current War, a movie about the whole electrical battle, gets caught up in the Harvey Weinstein scandal and delayed by nearly two years.

But now The Current War is on track to light up screens this October, and the official trailer from the newly formed 101 Studios looks intriguing. Directed by Alfonso Gomez-Rejon (Me and Earl and the Dying Girl), the film stars Benedict Cumberbatch as Edison, Michael Shannon as Westinghouse and Nicholas Hoult as Tesla.

“This is a battle of the brightest minds of America,” says Cumberbatch’s Edison, setting the stage for what 101 Studios describes as the epic story “of the cutthroat competition that literally lit up the modern world.”

With Edison about to bring electricity to Manhattan with his new DC technology, Westinghouse and the upstart Tesla unveil the rival AC current, sparking American history’s greatest corporate feud.

The film had initially been set for a Thanksgiving 2017 release via The Weinstein Company, but got caught up in TWC’s bankruptcy in the wake of the Harvey Weinstein scandal. Former TWC CEO David Glasser and COO David Hutkin’s 101 Studios launched in January, and The Current War is its inaugural release. Read more about the film’s backstory here.

101 Studios releases The Current War to select theaters on October 4 before going wide on October 11. Check out the trailer above.