Continue to Deadline SKIP AD
You will be redirected back to your article in seconds
Skip to main content
October 22, 2019 2:48pm
2Comments 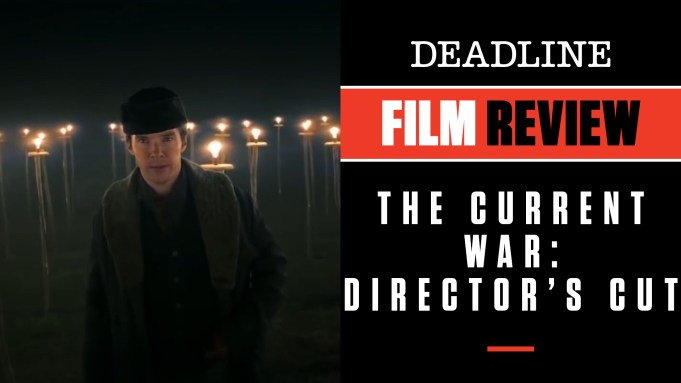 If there were an Oscar for Best Save, the new reworking of the two-year-old Toronto Film Festival misfire The Current War would win in a walk. I first saw this film at TIFF, where the Weinstein Company held its world premiere in 2017. It was premature, to say the least, and the film was not ready for primetime, not well-received critically nor by audiences as it was an overlong rather confused drama depicting the AC/DC battle between Thomas Edison and George Westinghouse to get the rights to light up the country. Then, making matters worse, the Harvey Weinstein scandal broke a month later, taking down TWC and the film’s distribution with it.

Once it finally got extracted, a reworked version played in some foreign territories due to contractual obligations. But now — in a completely new version that is so radically different it has been renamed as the “Directors Cut” — the vision of filmmaker Alfonso Gomez-Rejon finally has been realized, and the movie indeed lives up to its potential. It has a new lease on life and even has a new Rotten Tomatoes page with all those initial negative reviews from TIFF washed away.

With his editing team on board (credited editors are Justin Krohn and David Trachtenberg), Gomez-Rejon has smartly reimagined his movie and made it far more vital and entertaining than the lumbering version I recall. Now it pops off the screen as any film with this kind of cast and production value should. The story remains the same, but it has been given new life, and it is thrilling to watch — particularly for those interested in the titans of our history and people who would be running Silicon Valley if they were alive in this era. They were the Steve Jobs and Bill Gates of their day. This Current War is an extraordinary movie, and considering the behind-the-scenes journey it has been on, that is a pretty great achievement. It deserves its second chance.

It opens with a stunning scene in which snowy weather cannot stop Edison’s (Benedict Cumberbatch) demonstration of his greatest achievement: the lighting display of his DC current that promises to revolutionize the industry and light up New York. The movie then moves on to focus on his plans to launch the standard that will be used — and Edison is quite the salesman, a man whose inventions are formidable. But just before that can happen, the much more practical, and less arrogant, Westinghouse (Michael Shannon) enters the picture with his AC current, one that he claims will be far more effective and cost conscious than Edison’s. The battle is on and the movie cuts back and forth between the two principals, as well as Nikola Tesla (Nicholas Hoult), the genius caught in the middle between the two behemoths of electricity.

To the winner goes the 1893 Chicago World’s Fair and much acclaim as two household names — General Electric and Westinghouse — are born. Complicating matters is the introduction of the dark side of this new age, the negative power of it in the emergence of the electric chair. Edison had promised he would never use his work for harm, but using the chair for capital punishment becomes a hot-button issue in the race to wire the country. It is an interesting detour, but Gomez-Rejon and screenwriter Michael Mitnick never let it drown the proceedings. This ultimately is a battle of wills between two giants, and it is fascinating to watch.

The cast is superb. Cumberbatch fits this role of Edison, sometimes a real prick, perfectly capturing all his brilliance, showmanship and pure conceit. Shannon nicely and shrewdly underplays Westinghouse and nails it. Hoult is excellent as Tesla, and there is fine work from Tom Holland as Edison’s secretary; Katherine Waterston as Westinghouse’s loyal wife; and Tuppence Middleton, who brings pathos to her role as Edison’s wife in a marriage struck by tragedy. Matthew McFayden is the epitome of rotten in a supporting turn as J.P. Morgan. Shout-outs are in order to Chung-Hoon Chung’s superb cinematography, and Jan Roelf’s striking production design. Among those lending their names as executive producers are none other than Martin Scorsese and Steven Zaillian. Producers are Timur Bekmambetov and Basil Iwanyk. 101 Studios releases it Friday. Check out my video review at the link above with scenes from the film.

Do you plan to see The Current War: Director’s Cut? Let us know what you think.