Continue to Deadline SKIP AD
You will be redirected back to your article in seconds
Skip to main content
November 13, 2019 2:36pm
3Comments 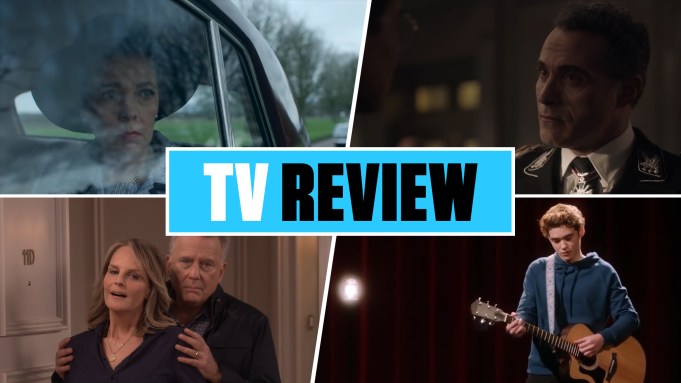 The live impeachment hearings that could paralyze Donald Trump’s presidency took over cable news and most of the Big 4 networks today. Yet, believe it or not, there are other things on television this week besides Impeachment Apprentice.

With offerings from the newly launched Disney+, Amazon, Spectrum Originals and a bit of returning royalty from Netflix, one of those will be the show you have to watch this week – as you can only discover from watching my video review above.

After a nearly two-year absence, The Crown is back for a third season on Netflix on November 17. A rare Sunday debut for the streamer, the Peter Morgan created chronicle of the reign of Elizabeth II has a new Queen this year. In a 10-episode season that covers the cultural uprisings of the swinging sixties and the 1970s, Oscar winner Olivia Colman has taken over from Emmy winner Claire Foy as the reticent monarch.

The Broadchurch and The Favourite star is joined by a new cast consisting of Outlander alum Tobias Menzies as Prince Philip and Helena Bonham Carter as the hard partying Princess Margaret. Additionally, Exorcist lead Ben Daniels now plays Margaret’s increasingly estranged husband Lord Snowden, God’s Own Country’s Josh O’Conner as the awkward Prince Charles and Game of Thrones vet Charles Dance is on board as the scheming Lord Mountbatten.

The Mandalorian attracted a lot of attention with the glitch ridden premiere of Disney+ yesterday across Canada, the Netherlands and America, but the Jon Favreau created Star Wars series was far from the only original from the new streamer. Weaving a digital web of nostalgia and branding deluxe, the first episode of High School Musical: The Musical: The Series also dropped on Disney+ on November 12 with a second episode coming on November 15 and more every week over its 10-episode run.

Straddling trans dimensional pathways and alt-history within alt-history, The Man in the High Castle steps up for its fourth and final season on November 15 on Amazon.

Meticulously designed and crafted, as it has been since its 2015 launch, the Emmy winning series based on Philip K. Dick’s 1962 novel of a world where the Nazis and Imperial Japan won World War II has become increasingly poignant since its debut.

Led by Alexa Davalos and Rufus Sewell as leading American Nazi John Smith, the Isa Dick Hackett executive produced series saw the already high stakes of the series raised considerably at the end of Season 3. With a divided America hovering on a battle for full domination by the powers-that-be in Berlin and Tokyo and a revolt from within, the tense 10-episode conclusion of MITHC also stars Joel de la Fuente, Jason O’Mara, Chelah Horsdal and newcomer Frances Turner.

Back on November 20 over 20 years after it wrapped up an Emmy winning seven season stint on NBC, Mad About You is clearly Spectrum Originals big play for a bigger audience. In this age of the streaming wars, one thing we’ve all learned is that revivals get a lot of attention and the long-sought after reunion of Helen Hunt and Paul Reiser as an older and maybe wiser Paul and Jamie Buchman has been among many people’s Top 10.

Oscar winner Hunt helms the opening returning episode of the half-hour comedy, from showrunner Peter Tolan and Sony Pictures Television. The new Mad About You will start with six new episodes to be followed by another half dozen on December 18.

So, from that varied selection, who will be the show you have to watch? You’ll have to watch my review above to find out.