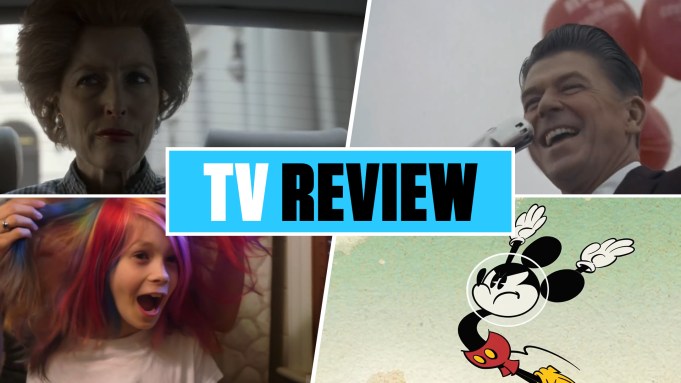 Although the incumbent refuses to concede and the election is all but over, there is plenty of politics to be found on the small screen this week – and I’m not talking CNN, MSNBC or Fox News.

In that vein, where will the vote go for the show you have to watch this week? Well, let’s see who is on the ballot – check out the video review above.

Debuting on November 15, Showtime goes pure POTUS with The Reagans. Where’s My Roy Cohn director Matt Tyrnauer’s  four-part docuseries pulls back the curtain on the Lew Wasserman-created actor-turned-politician and the real power behind the throne, Nancy.

Flooding into our own times from the 1980s, series executive produced by Tyrnauer, Corey Reeser and Stephen J. Morrison also tackles the polices of the popular two-term Republican’s administration. That critically includes destructive domestic moves like deliberately ignoring the HIV/AIDS pandemic, harsh budget cuts, as well as the heating up of the Cold War and the near fatal Iran-Contra scandal.

Moving to the politics of self and identity and premiering tonight, HBO’s Transhood documentary is an up-close spotlight on four transgender and gender-nonconforming young people (ranging from 4 to 15) and their search for who they know they are. Directed by former High School Confidential EP Sharon Liese over five years, Transhood follows Kansas City natives Avery, Jay, Leena and the youngest Phoenix as they, their families and our society, face challenges and consequences including from those closest to them in Donald Trump’s America.

In a blast from the past to the present, Disney+ drops The Wonderful World of Mickey Mouse on November 18, which is the little big guy’s official 92nd birthday to film aficionados.

A sequel of sorts to the Emmy-winning Mickey Mouse series from artist and producer Paul Rudish, the animated and fast-paced WWMM reunited Mickey, Minnie, Donald Duck, Daisey, Goofy and the perpetual Pluto with a slew of cameos from Disney’s history. Debuting with 10 episodes next week, The Wonderful World of Mickey Mouse will be back with 10 more seven-minute episodes next summer.

About to butt up against the Brexit and Scottish independence moves of the 21st century, The Crown returns to Netflix on November 15 for its fourth season.

The always amazing Olivia Colman is back for a final stint as the stoic Elizabeth II, as is Helena Bonham Carter as Princess Margaret, Josh O’Conner as Prince Charles and the rest of the Firm. However, the arrival of Princess Diana and Margaret Thatcher to the mix this season is what has everyone’s antenna buzzing. Now set in the Reagan Era of the 1980s, newcomer Emma Corrin portrays the ultimately doomed Diana, and Gillian Anderson is the Iron Lady in the Peter Morgan drama.

Of course, as new actors come to play the Royal roles, The Crown will be galloping toward our own era in the upcoming Season 5 and the sixth and final season to follow. It is, in many ways, a story that we all know the ending to, or at least the last chapter for the 94-year-old monarch.

So, which one will be the winner of the show you have to watch this week? Watch my video review above to discover.