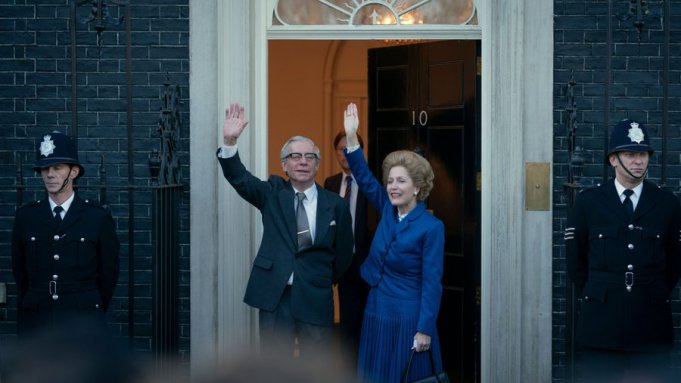 Can anyone feel a chill? That will be the famously frosty relationship between Margaret Thatcher and Queen Elizabeth II, which — if the latest trailer for The Crown is anything to go by — looks like it will blow icily through Season 4 of Netflix’s lavish royal drama.

The streamer has dropped the latest in a line of trailers for the Left Bank Pictures drama and it seems as though Gillian Anderson and Olivia Colman will be sharing plenty of screen time together, as the powerful women they portray joust in the opulent surroundings of Buckingham Palace.

“Joblessness, recession, crises… It’s a dangerous game to make enemies left right and center,” Colman’s Queen observes. “What if one is comfortable with having enemies?” Anderson’s Thatcher retorts. “Are you?” Her Majesty asks. “Oh yes,” comes the reply. Expect much more of this as Season 4 unravels.

The trailer also offers a better glimpse at how Princess Diana’s story will play out. Portrayed by newcomer Emma Corrin, the troubled royal is pictured roller skating and dancing alone in Buckingham Palace, while those around her discuss her role in the family.

“In time, she will give up her fight and bend, as they all do,” remarks the Queen Mother, played by Marion Bailey. “And if she doesn’t bend, what then?” the Queen asks, before Helena Bonham Carter intervenes ominously: “She will break.”

The Crown Season 4 premieres on November 15.