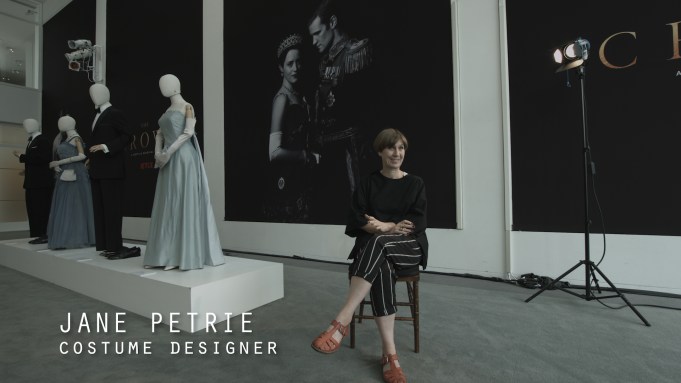 With an abundance of period work behind her on films like Genius and Suffragette, Jane Petrie would seem the perfect artist to oversee costumes for Netflix royal drama The Crown. Early in her career as wardrobe mistress—and later, as a costume assistant—Petrie tracked Queen Elizabeth I’s looks with two films: Elizabeth and Elizabeth: The Golden Age. Having covered this antecendent monarch of the 16th century, why shouldn’t she get her crack at Queen Elizabeth II?

While Petrie would take over for Emmy-winning costumer Michele Clapton for the series’ second season, she wasn’t sure upfront that she wanted the job. Watching a rough cut of Season 1 prior to its debut, though, the designer was compelled. “I realized just how brilliant the scripts are, and that they’re really about the whole country and world politics,” Petrie says on the latest edition of Deadline’s Production Value video series. “The narrative isn’t just sort of a shiny representation of the royal family; it’s so much more than that.”

While Petrie won’t return for Season 3 of The Crown, thus far, her instincts in signing on for Season 2 have been validated. Winning the Costume Designers Guild Award for Excellence in a Period Television Series for her contributions, the designer also drew a nomination from the BAFTA Television Craft Awards. For our interview, she took a break from production on David Michôd’s hot period drama The King (a Netflix original starring Oscar nominee Timothée Chalamet) to discuss the beginnings of her career and the craft she has brought to The Crown.

Looking to the series’ celebrated first season for purposes of continuity, Petrie was always encouraged to make her season of The Crown her own—and given the way in which the series jumps forward in time between seasons, there was little reason to hew too closely to any previous designs. Of course, on a project indebted to historical fact, Petrie’s work begins with an extensive prep process.

“I start just [with] broad research—social history, history. What are the main events that are happening around the time?” the costume designer says. “I watch a lot of documentaries, and in the case of The Crown—because it’s a period that has been documented on film—I watched lots of film footage.”

While research is essential, achieving authenticity on screen is certainly not as simple as picking up a book, or flipping on History Channel. “So much research has been edited before we even see it, so if you’re watching a documentary, it’s been selected,” Petrie explains. Approaching projects of this nature, the designer is always attuned to the little details—what was worn by the average man or woman living at a given time, as well as how they wore it.

“What I really look for is people wearing their clothes and being themselves, and not doing this sort of period thing of, ‘Their gloves match their shoes and their handbag, and everybody has to wear a hat, and everything’s neat,’ ” Petrie says. “I want to find how people really wore it, and how relaxed they were, and how they inhabit their clothes. If somebody’s wearing something and I believe it, that’s my first base.”

For Petrie, challenges of authenticity and chronology continued to present themselves throughout the production process, resolved only through “a lot of swatching, and a lot of searching.” “The hardest part of that—when you really pull it down to the nuts and bolts—is finding the quality of suiting for the menswear,” she reflects. “The rules that we have now that we make suits from are so very different. [They’re] so lightweight and soft compared to those heavy, dense wools that they used to use.”

Outside of finding the raw materials for a series’ costumes, there is also the matter of conditioning them for use onscreen. “Even if you can go to a shop and buy something, it’s unlikely it’s going to go in that condition onto camera,” Petrie notes. “It often needs to be dyed, slightly broken down, given a little bit of a history, a bit of wear and tear.”