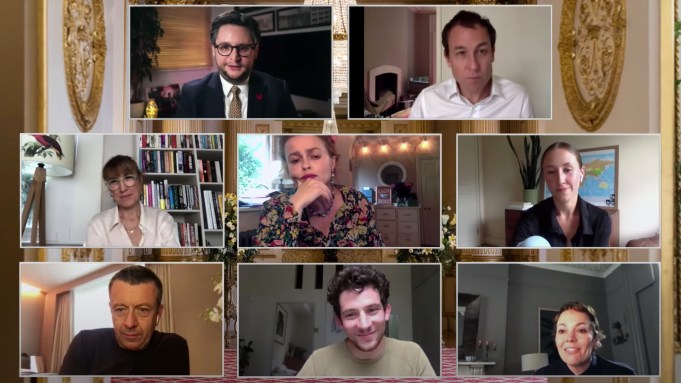 When it first premiered in 2016, Peter Morgan’s Netflix series The Crown was an instant smash. Aiming to tell the epic story of Queen Elizabeth II’s record-breaking spell as Britain’s longest-serving monarch, starting with her marriage in 1947 and seeing her reign through to the earliest 20th Century, it caught the attention of royalists and republicans alike. Some were hooked by the history and the pageantry, painstakingly researched from detailed court records, and others by the unprecedented psychological detail that showrunner Peter Morgan brought to the saga of the famously tight-knit Windsor family, whose gilded lives have been rocked by scandal and tragedy.

Speaking to Deadline’s Joe Utichi as part of Netflix’s FYSEE TV In Conversation series, Morgan said he was delighted that, after the three successful outings, The Crown was still a ratings draw and en route to a fourth and fifth season. Asked to explain the show’s appeal, he said, “I suppose it’s really her, isn’t it? It’s our fascination with her—the Queen—and the fact that she’s been in everybody’s lives; our lives, our parent’s lives and our grandparents’ lives. She’s been on every stamp in this country [the U.K.], on every bank note, for as long as any of us can remember. So it’s something that doesn’t have a narrow constituency—it speaks to multiple generations and it brings multiple generations together in the process of uncovering it, discovering it and enjoying it. I mean, anecdotally, that’s how I gather people are watching it—they’re often not watching it in the way they would traditionally [watch it], they’re often watching it with other members of their families, or with people of different generations, and that’s lovely.”

One of the original show’s many fans was Olivia Colman, who, for Season Three, took over the role of Queen Elizabeth from Claire Foy. Despite having recently won an Oscar for portraying 18th Century Queen Anne in 2018’s The Favourite, Colman admitted to having reservations about her ability to portray one of the most famous women in the world today. “It’s definitely more daunting to play someone that everyone knows,” she said. “The beauty of Queen Anne is that no one can tell me she didn’t sound like that, but everyone can tell me what the Queen sounds like, and that’s slightly annoying… It’s much harder to play people that everyone has a vision of, a picture of, and has ideas about. I’ve never joined a show that’s already been up and running and successful. But I was such an enormous fan of the show that I didn’t really think about it.”

Joining Colman, and the cast, was Tobias Menzies, who took over from Matt Smith as Queen Elizabeth’s husband, Prince Philip. Like Colman, Menzies had been a fan of the show and knew that, with Morgan at the helm, the standards would remain high. “I wasn’t surprised about the quality of the scripts,” he said, “because I had really admired what Peter had done with the previous cast for the first two seasons, and the scripts we were being sent seemed really of a piece with all of that. That’s Peter’s genius: weaving together the very public and the very private, and that’s sort of the magic of the show, really. I have to admit, I didn’t really know a great deal about the Royal Family going in to this show—they’re not a family that I particularly had paid a lot of interest to. [But] I think what the show does really well, even for people who maybe aren’t necessarily that interested in the Royal Family, is that it takes you into the decisions and the challenges of trying to live as a family in this institution. The continual frustrations, the challenges, and sometimes a privileges and joys of this very peculiar—and acutely British—institution.”

Season Three also saw the introduction of Helena Bonham Carter as Princess Margaret, Queen Elizabeth’s older, and only, sibling. Long before the tabloid stories that defined Queen’s “annus horribilis” of 1992, Princess Margaret had been a one-woman scandal sheet of her own back in the day, culminating in a much-publicized marriage breakdown in 1976. Bonham Carter praises the show for portraying Princess Margaret as a woman first rather than a figurehead.

“I think the reason this show has been so successful is because we’ve all taken [the Royal Family] for granted,” Bonham Carter said. “We’ve all thought that they were just [cardboard] cut-outs, and the surprise is, ‘Oh my God—of course [they aren’t].’ What must they have felt? They had a human experience through all these different events. Princess Margaret did get divorced, but [people] didn’t really think about [her feelings]. And when you’re playing somebody from the inside, from that perspective, you realize how hard it is to go through a divorce in public, to be that vulnerable and experience all sorts of things that come with divorce when you are you are in full view of the entire world.”

The Crown, she decided, was “the story of an ordinary family in extraordinary circumstances”. “And, ultimately,” she continued, “it’s not a place to be if you are suffering, it’s not a place for any individuality. Duty and responsibility come first, and it doesn’t allow for much fallibility or humanity, or human foible.”

By Season Three, two of Queen Elizabeth’s children had become young adults, which saw the arrival of Josh O’Connor as Prince Charles and Erin Doherty as Princess Anne. O’Connor praised the show for its unpredictability, even when dealing with well-known historical events. “I didn’t know much about anything [to do with the Royal Family] to be honest,” he joked, “so everything was a surprise! But I think the surprising thing, as always in The Crown, is that the unexpected [version of the story] is what’s told. There were certain stories that you look back at and you go, ‘Well, you can’t not tell that story—but how can you tell it in a more interesting way, or from an angle that hasn’t been seen before?’”

For Doherty, the chance to play Princess Anne, arguably the saltiest of the Windsor family after her father, was a dream come true. “For me, [Anne] is the furthest person away from my natural personality that I’ve ever been given the opportunity to play,” she said. “What it is with her that I think is fascinating is that she just doesn’t really give a crap about what anyone thinks—she’s just so honest with her emotions. And it’s so rare to be able to play someone who just tells the truth, without faffing about.”

Director Jessica Hobbs, who helmed two of the Season Three’s episodes, paid testament to Donerty’s commitment to the role. “I remember seeing her test audition,” she laughed. “Peter showed it to me. I was doing some work with him and he said, ‘Come and have a look at who we’re looking at for Anne,’ and it was just this raw contemptuous fury. I was, like, ‘God, she’s perfect.’ Absolutely perfect. And Erin never faltered from that. It was pretty joyful to watch.”

To see more from Peter Morgan and The Crown’s creative crew, watch the video.