'This Is Us': How NBC Drama Wrapped The Pearsons' Story After Six Seasons; Dan Fogelman Breaks Down Series Finale; Stars React To End
Read the full story
March 2, 2021 12:55pm 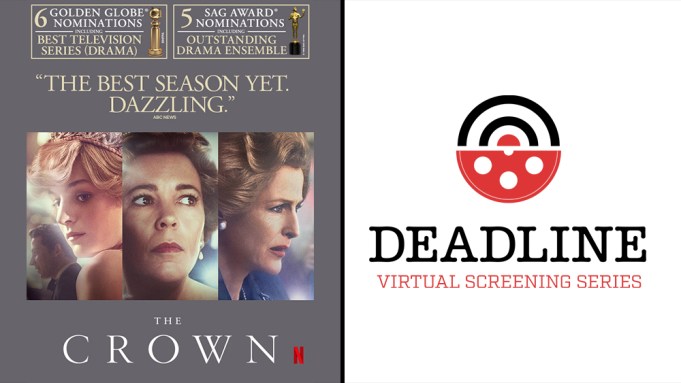 During an AwardsLine Screening Series Q&A, Anderson, who plays Prime Minister Margaret Thatcher, pointed out, “Having Princess Diana and Margaret Thatcher in the same season is a quite a big deal, those are two pretty iconic historical characters,” adding that the wide age range of the characters seems to be an added factor. Viewers, she said, have previously spent “A lot of time amongst a lot of aging people, and there’s something wonderful and refreshing and enlivening and exhilarating about having a youthful cast in there as well, and I think the balance of those two things really helps.”

This latest Season 4 depicts both the advent of Thatcher, but also the beginnings of Prince Charles (O’Connor) and Princess Diana (Corrin)’s relationship. We see the couple meet amid the Royal family’s disdain for Camila, the woman Charles really loves, and their encouragement of the match between him and the then Lady Diana Spencer—then only a teenager.

Corrin said she felt some of this season’s particular shine had come from the beloved ’80s soundtrack, which featured Duran Duran and Elton John among others. “These are songs that people know, and people have their own memories associated with and everything feels a bit more familiar,” Corrin said. “And I guess The Crown’s becoming more recent and people can remember this time. I think that maybe upped people’s intrigue and fascination with it in some way.”

The AwardsLine Screening Series showed the episode entitled “Balmoral”, in which both Thatcher and Spencer are put to the test with an invitation to the Royals’ Scottish residence. During the visit, Spencer was a huge hit with the family, while Thatcher fared less well.

“There are so many things that happen in that episode,” Anderson said. “Who doesn’t like [watching] big family meals around the table and games that go on into the night and drinking until you’re sloppy?… It’s very interesting to then see that juxtaposed with someone like Thatcher, who is, aside from getting everything wrong by their rules, so to speak, is also just incredibly uncomfortable anywhere outside politics really, or outside her own zones of workaholism.”

For Spencer, this would be the moment the family decided Prince Charles should marry her—a decision which, as history shows, would lead to misery on both sides. “It’s heartbreaking,” Corrin said. “It’s Phillip who ends up convincing Charles to propose because he says she’s perfect. ‘What more are you waiting for? What more do you want?'”

And while the experience of marrying into the Royals seems promising to Spencer initially, we see her left alone in the Palace for days on end, desperately unhappy. “She’s completely shut out and given completely cold and very unwelcome treatment increasingly,” Corrin said. “For her it must have been completely baffling.”

Playing Prince Charles at his least likable, as he turns away from his ever more anxious new wife, was a challenge O’Connor relished, he said. “It’s like my favorite thing—not being unlikeable—but, what’s so funny is that in Season 3, there was this commotion of, ‘Charles is so likable, and you’ve made him so likable and so lovable and we all feel so sorry for him, and it’s amazing you’ve achieved that.’ And it’s literally the opposite this season. I guess it means I’ve done my job right that people one year later are now [saying], ‘We hate you’.”

But, as O’Connor pointed out, Prince Charles had his reasons for being deeply unhappy and emotionally distant. “Inevitably, I’ve got lots of sympathy for him, for the character,” he said. “But it’s also the best fun ever to play someone who’s sympathetic and likable, and then to strip that apart and go a little bit dark and angry. It’s quite fun.”