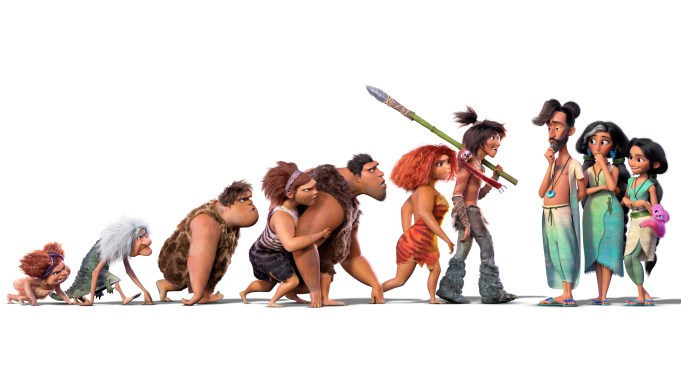 A new era begins for The Croods: A New Age with today’s release of the upcoming DreamWorks Animation film’s official trailer.

Directed by Joel Crawford with a voice cast that has Emma Stone, Nicolas Cage, Ryan Reynolds, Catherine Keener and Cloris Leachman returning to their original Crood roles, A New Age follows the prehistoric family as it seeks a new place to live. When they find a walled-in paradise that seems perfect for a new home, the Croods meet a thoroughly modern-ish family the Bettermans. As tensions escalate, the families take on an adventure to forge a new future.

Directed by Crawford (Trolls, and the Kung Fu Panda franchise), the film is produced by Mark Swift (Captain Underpants: The First Epic Movie).

Universal recently moved up The Croods: A New Age release date from December 23 to Wednesday, November 25, indicating the studio’s confidence that, according to recent reports, Disney will move Pixar’s Soul out of the Thanksgiving stretch.

The first Croods, released by then DWA distribution partner 20th Century Fox, made $187.1 million domestic and $587.2M at the global box office in 2013.

Check out the new trailer for The Croods: A New Age above.