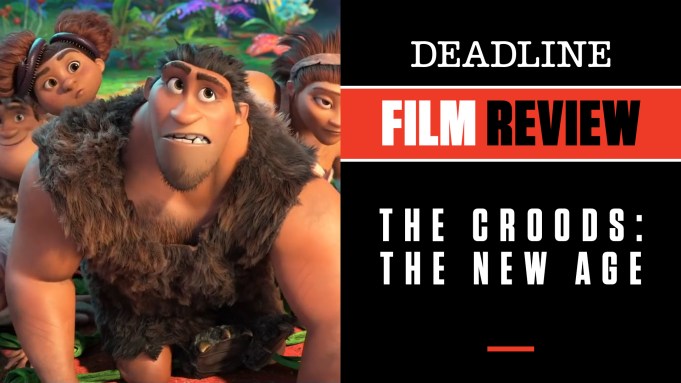 I suppose DreamWorks Animation should be thanking Fred Flintstone and brood for the solid Stone Age cartoon inspiration for the creation of The Croods: A New Age, a “new age” Bedrock-like continuation of the franchise that for me at least packs more laughs and fun than the original did in 2013. Seven years since that toon became a big hit marks the longest time for DreamWorks to work up a sequel for any of its films. I am not sure why it has taken that long, but the wait hasn’t diminished the charm and fun of the concept, and the new edition moves it forward in just the right direction thanks to the addition of a second family of characters that are the perfect fit to keep it fresh.

Rest assured, the original Crood clan is back in force with the killer cast repeating voice-over duty including a great Nicolas Cage as Grug Crood, Catherine Keener as his wife Ugga, Emma Stone (aptly named) as Eep, Ryan Reynolds as boyfriend Guy, Clark Duke as Thunk and a hilarious Cloris Leachman returning as Gran. Plotwise, it seems times are changing and the pack needs to go new-home shopping — stumbling one day on a virtual paradise they seem awed by until discovering another family, the Bettermans (get it?), already lives there.

Phil Betterman (a perfect Peter Dinklage), wife Hope (the always terrific Leslie Mann) and daughter Dawn (Kelly Marie Tran) are a couple of notches up in the evolved category, at least compared to the still-primitive cave-dwelling Croods, and represent the Stone Age modern family, much like the Flintstones did in their time in the media spotlight. Grug immediately is turned off by them, and it gets complicated when it turns out, quite coincidentally, that Guy actually was brought up by them and looks upon them as the only real parental figures he ever had.

Seizing on that, Phil and Hope see this chance re-meeting as a way to bring him back into their lives, but will it be at the cost of his relationship with Eek? The latter quickly becomes besties with Dawn, and the Bettermans offer guest rooms (separate rooms — unheard of for the Croods) as a measure of their hospitality. This sets up a lot of amusing scenes as Grug squares off against Phil, and the rest find their way into a new kind of lifestyle not thought imaginable. But hey, why are all those bananas off limits to Grug? That mystery gets solved as both families have to battle unseen forces of nature out there that threaten their haven.

Director Joel Crawford and a quartet of screenwriters — including Dan Hageman, Kevin Hageman, Paul Fisher, and Bob Logan (with story credited to Kirk DeMicco) — come up with lots of inventive twists, new age gadgets and smart dialogue that won’t turn off the adults watching with their kids. The animation, especially creature visuals, is top-notch here, a step above the first film, which should help ensure there will be more visits with this wacky family dynamic. Producer is Mark Swift. Universal releases it in theatres Wednesday just in time for the holidays. Check out my video review with scenes from the film at the link above.

Do you plan to see The Croods: A New Age? Let us know what you think.