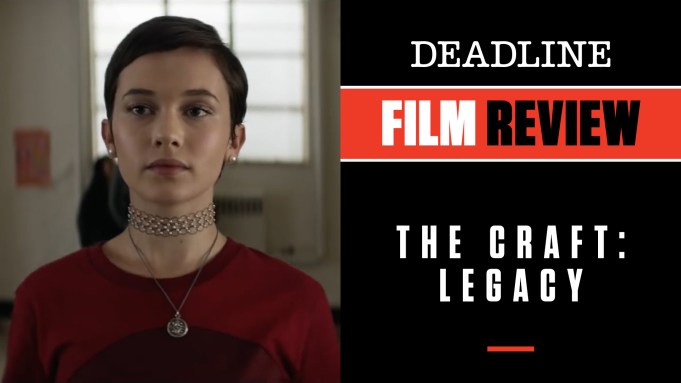 It has only taken 24 years, but Sony, with the help of indie low-budget horror powerhouse Blumhouse, finally has gotten around to a sequel (of sorts) to the 1996 teen witch flick The Craft. Less a remake than a franchise reboot, this teenage girl-targeted Halloween week release doesn’t really drive the idea of Andrew Fleming’s original (he stays attached as an executive producer), but under actress-writer-director Zoe Lister-Jones’ guidance, the emphasis on female empowerment both in front of and behind the camera gives it some gravitas that her predictable storyline does not.

Forgoing theatrical for a VOD debut, this is the kind of movie that would have benefited from a run in theaters in safer times since its target group tends to run in packs for their movie choices. And with an appealing foursome of young female stars, it might have drawn at the multiplex, at least with the Halloween tie-in. Coming on the heels of last week’s debut of Robert Zemeckis’ young-kid-appeal The Witches, which featured Anne Hathaway chewing up the scenery, this one is no less credible but definitely a bit more bewitching for the older-teen crowd.

At the center of the plot is Lily (Cailee Spaeny), a high school student looking to fit in somewhere but finding her world turned upside down as she and her mother, Helen (Michelle Monaghan), take on the blended-family routine by moving in with Helen’s BF, Adam (David Duchovny), and his teenage sons Isaiah (Donald MacLean Jr.), Jacob (Charles Vandervaart) and youngest Abe (Julian Grey) — who at least is the most welcoming of the bunch since he is happy for a little different company than his siblings. In no time, a clique, actually that would be coven, of students befriend Lily when they see she has the “powers” that clearly make her one of them — a witch.

That is definitely demonstrated when she physically does a number on Timmy (Nicholas Galitzine), the obnoxious and misogynistic friend of the brothers, putting him well in his place. They need a fourth, as it were, as they already represent Earth, Wind and Fire but need a Water. But of course. Lily is lured into the coven that really, other than their seasonings of the witch tribe, is just like any other pack of girlfriends. The film’s most amusing bit has them collectively casting a spell on Timmy that miraculously turns this jerk into the most sensitive and caring young man you could imagine, the Robert Pattinson of their dreams. It also ignites Timmy’s romantic side to the point where he longs for Lily in just the way she finds mouthwatering. Good times.

But it gets complicated from this point on, and the film (only enough plot for 87 minutes before end credits start running) turns into a somewhat silly special effects-driven thing when it begins to pit the genders against each other in predictable and disappointing ways. The Craft: Legacy succumbs its charms to the needs of the horror audience, but I doubt the scare tactics employed here with have viewers jumping very high off their couches.

Lister-Jones is to be commended for trying to send a strong message of female power within all this hocus pocus, and also for her casting of the girls, each a winner in their own right including Gideon Adlon as Frankie, the lively Lovie Simone as Tabby and transgender Zoey Luna as Lourdes. GLAAD worked with the producers in their search for a transgender female, and it pays off in the sheer talent of Luna. Monaghan brings some nice depth to her scenes, while Duchovny quite frankly could do his role in his sleep. The other males, with the exception of a nice turn from Galitzine, are strictly one-dimensional. This one is all about the girls, and that will be its legacy. The producers are Douglas Wick, Lucy Fisher and Jason Blum. It all looks like it was made for a price. Sony sends it out Wednesday on VOD.

Check out my video review above with scenes from the film. Do you plan to see The Craft: Legacy? Let us know what you think.